The last few days have basically involved lots of riding and lots of rain, but also lots of amazing scenery.

The first day out from Bukittinggi was kinda rough…I had a bit of a collision…
I was heading up a narrow and very windy road. As I was making a sharp turn to the left, a kid (maybe 12 or 14) was coming down the hill, making a right turn. As he was exiting the turn, his right bar glanced off of my right pannier. I stayed upright, but he wobbled for a second and went down. I stopped, and immediately had a decision to make. I’ve heard of plenty of stories of something like this happening, and the foreigner not being treated well (financially or physically) regardless of who was at fault. The thought crossed my mind to just haul ass out of there, but as I didn’t feel any type of physical threat was present, I went and checked how he was. Another guy had just shown up, and helped him to his feet and picked up the bike. Other than a couple minor scrapes on his right arm, he was just a bit shook up. Luckily he had a helmet on, and also slid into the grass, or the damage could’ve been much worse.

As a crowd gathered a couple people got in my face a bit, but the rest of the crowd quickly pushed them away. Through one girl that new a tiny bit of English, I found out that the crowd of people wanted me to pay his hospital bill, despite the fact no one was accusing me of being at fault. I agreed, thinking it would be a much more minor expense to me than it would be to him or his family. A couple cops came, and we all went into the hospital together. The kid got bandaged up, and everything was fine.
Throughout the whole process, still no one was accusing me of being at fault. But when the time came to pay for his hospital bill, the cop also told me that he wanted 1,000,000 Rupiah to cover the cost of damage to his bike. This is where I started to get a bit defensive, and pretty pissed, as it was clear they were just trying to get a bit of extra cash out of the ‘rich westerner.’ I immediately refused, saying I agreed to pay his hospital bill, but never agreed to anything about the bike. The cop dropped the price to 500,000 Rupiah…what the fuck…it felt like I was trying to buy a tshirt in the Chiang Mai night market, not help a kid get his cut cleaned and bandaged. Again, I refused. The cop said I needed to do something to pay for the damage to the bike. I responded by asking if he was labeling me as responsible for the accident. When he said no, then I said that if I need to pay for the damage to the other motorcycle, then we better go outside and assess the damage to my bike and figure out who is going to pay me for it. That ended the discussion…I paid for the hospital bill as I’d agreed, and left…pretty pissed about the whole situation. After having a chance to settle down a bit, I was just happy that the kid’s injuries were minor and that nothing more serious happened to either of us.

So…moving on to a few much less exciting things…

We’ve had some issues with getting fuel here. Typically you can pull into a station and get what you want in a reasonable amount of time, but sometimes it’s not quite that easy. Some times they’ll be limited with the type of fuel they have (and sometimes have none at all), and often times we’ve had to wait in massive lines.
In this case specific case, someone at the gas station pulled us out of the motorcycle line and lead us up to the front of the car and truck line for a quick fill up!

We had some occasional rough roads while going through the mountains. Lots of these roads would get hit hard with rain and running water, which causes a ton of damage. So often times, we had to navigate through massive potholes or sections of mud.

We stopped one night on a beach for some free camping, swimming, and great views.

The bioluminescent plankton in this area were really bright…While walking through the water, you’d end up with bright blue glowing spots on your legs. And when you sat and watched the waves from the shore, they’d light up a bright blue when they’d roll over themselves…quite an incredible thing to see, but sorry, it doesn’t photograph well…

We rode across one bridge that was under some serious repairs.

The bank of the river had washed away, leaving about an 8ft gap between the bank and the bridge, so they laid a few huge steel planks across it. 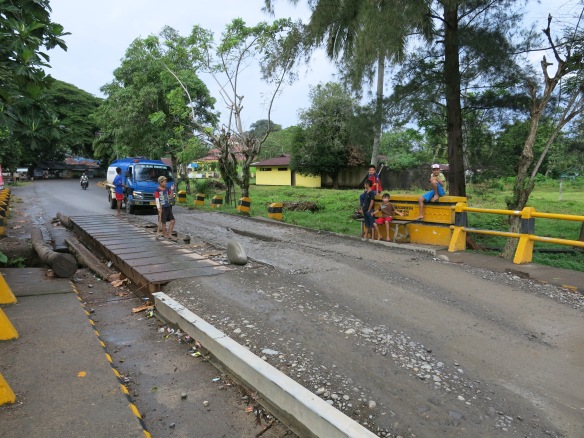 Here was the construction crew, keeping the makeshift bridge section in working order and directing traffic across it.

We spent a night in the town of Manna. Come 9:00pm, the scooter racing started on the main drag. Typically, 3 at a time would race up and down one section of the street, doing laps around the barrier in the center of the road. All of this was done amongst regular traffic, with no helmets or shoes, and sometimes with a passenger.