Although three nights in Berlin allowed me to see a lot of new things, I could’ve easily stayed a lot longer. I don’t get as excited about seeing new cities as most people do, but there’s something different about Berlin…I’m sure I’ll be back again (maybe multiple times) one day.

My next destination was Altendorf, near Bamberg, which wouldn’t have been on my radar if it weren’t for my friend Patrick. But now, having been there, I’d recommend it to anyone going to Germany. Bamberg was a great town…Brugge-like, in that new construction is restricted, so it has maintained a very traditional look.
I met Patrick in Thailand last summer, and he was gracious enough to give me a place to stay for a couple nights and be my own personal tour guide for the area.
I got into town late, but not so late that we couldn’t run to the next village to see the little festival and fireworks they had going on, and drink one too many liters of beer from the town’s brewery. The next day we had lunch (uhhh, maybe breakfast at noon, thanks to all the beer from the night before) at Patrick’s Grandma’s. A nice traditional meal in a foreign country is always fun, but a traditional meal (broccoli soup, wurst, sauerkraut, and potatoes) cooked by your friend’s Grandma beats that any day. The house she lives in is across the street from the train tracks, and Patrick told me that during WWII, Russian planes strafed the area to hit a German train. In the process, they shot up the house. Afterwards, German troops came through the house, removing all the doors, which were then used as stretchers to carry away the injured soldiers (history!).
In the neighboring village of Buttenheim is the Levi Strauss Museum, which is in the house he was born in. (no nails were used in it’s construction…it is held together entirely by rivets…)

Interesting, because three days prior, my lone pair of Levi’s jeans that I brought on this trip started to rip. While on the tour, I said a silent prayer to brother Levi, but unfortunately, not only is the rip still present, but it has grown.
I didn’t have my camera with me when we went into Bamberg, so all you get is a few 8-bit pictures from my phone. You’ll have to go yourself to see what it’s really like…or google might have a couple pictures (but google won’t provide a Schlenkerla rauchbier, so you better just go check it out). 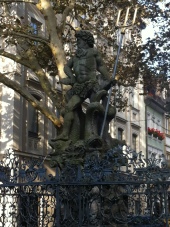 Dinner in Bamberg was haxen, dumplings, and more sauerkraut (if you think I have an obsession with German food, you’re correct). If you haven’t had this, you need to. If you have, you’re probably craving haxen right now. Between this, Grandma’s lunch, and Schlenkerla, I think my stomach felt like an honorary German for the day.

Next day I headed south, towards Austria. I took the romanticshe straße a good portion of the way…it was less romantic than it was cold. I spent the night in a village at the foothills of the Alps, in view of two castles – Neuschwanstein and Hogenschwangau. Having been here a few years back, I had no plans to tour them, but the view from afar would never get old. The plan for tomorrow is to do a big loop through the Alps and then make my way to Munich.

**Disclaimer, in case my sarcasm is lost via the internet – I don’t think the Strauss house was really built only with rivets, although I didn’t ask anyone, so who really knows…**