The last few days have been filled with some pleasant surprises. First, I’ll go back to Skopje (and earlier). While I was riding the Adriatic coast in Croatia, I passed two people on a tandem bike with a French flag on the back. A few weeks later, shortly after getting off the Lake Koman ferry in Albania, I passed a tandem bike in the mountains (I felt a little bad as I simply laid on the throttle and cruised up such a steep road, while they were in the middle of what I’m sure felt like an endless climb) with a French Flag…was that the same bike?! When I got into Skopje, there was a French couple at my hostel…turns out they were riding to Istanbul on a tandem…and we discussed our routes…it was definitely them that I’d seen twice before. How crazy?! And speaking of crazy, the two of them got married in September, and their honeymoon is a year long trip on a tandem across Europe, SE Asia, and South America. I guess they’ll at least know by the end of it whether or not marriage was the right decision.
Ok, on to more current events…
At the border crossing into Bulgaria, I knew I’d need to get insurance for my bike. I left home with a green card (insurance) that was good across Europe, but now it’s expired, as I’m spending a little more time in Europe than I expected. When I crossed into Macedonia, I had to buy insurance as well. I could get it right at the border, which was really convenient, but unfortunately, it was €50 for a month (that was the minimum time) and was only good in Macedonia…steep price for 5 or so days, but what’s one to do? (Yeah, I know, I could avoid these things if I’d stick to a schedule…)
At this point, I still had to cross into Bulgaria and Turkey, so I was expecting to get hit two more times for €50.

So, I exit Macedonia with no issues, and when I get to the Bulgarian crossing, I hand over my passport, title, and registration (I have yet to be asked for my drivers license at a border crossing) and explain that I need to buy insurance. No problem…
“Park the bike, go to that green shack 50m away, and get insurance.”
I go to the green shack, and the woman there is confused as to why he’d send me there.
“Insurance is in the white building to our left.”
The guy in the white building is equally confused as to why she sent me there.
“You have to go into Blagoevgrad for insurance. You’ll find it at the first gas station on your right.”
Uuuhhhh…Blagoevgrad is 30km away…that’s going to be a long walk, and hopefully they don’t give me the same confused look at the gas station.
I walk back to the guard and explain that I need to go into Blagoevgrad, hoping that he just lets me go and doesn’t need me to come back.
“OK, go to Blagoevgrad, and get insurance”
“Yes sir”
“MAKE SURE you get insurance!”
“Absolutely!”

In Blagoevgrad, I stop at the first gas station, ask the woman at the cashier about insurance, aaaaand, rejected. At this point, I’m ready to say to hell with it and hope that playing stupid will work when it’s time to exit the country in a few days. She starts speaking in Bulgarian to another employee, and he offers to lead me to a place I can get it. So he’s driving and I’m following, and he brings me to an insurance office (seems promising!). 30 minutes, one cup of coffee, and €26 later, I have a green card, and it’ll work in both Bulgaria and Turkey!

Next stop, Rila Monastery. Founded in the 10th century, this is the largest Eastern Orthodox Monastery in Bulgaria. The paintings on the outside, and the carvings on the inside (unfortunately, they don’t allow photos inside) are pretty incredible.

Google can probably show you what the inside looks like.

And finally, on to Sofia, where I’ll stay a couple nights.
The next morning, while out in the city, I ran into my friend Caroline. We’d met in Mostar, and now randomly ran into each other here…pretty cool coincidence!
Some pictures from around Sofia… 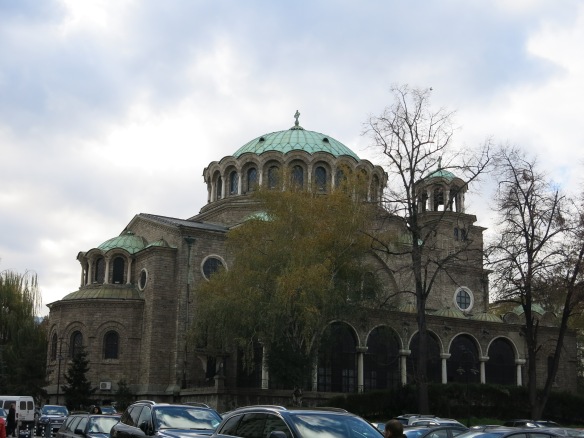 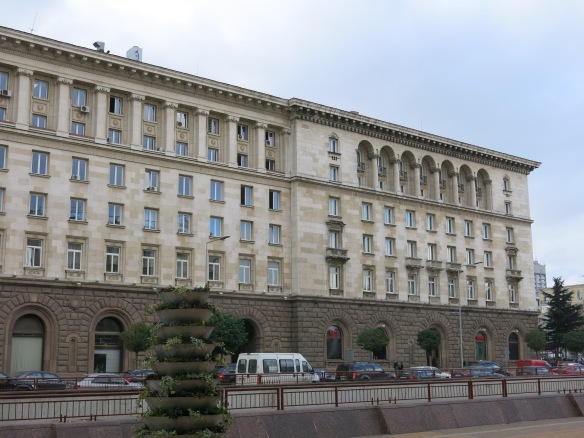 There are natural hot springs around Sofia, and they’ve piped some of the water into the center of the city. It’s about 35 degrees (celsius) and loaded with minerals. Lots of local folks were filling up bottles to bring home. Supposedly the minerals are really great for one’s health. I drank some, and I’m pretty sure I filled up on my yearly allotment of sulfur. 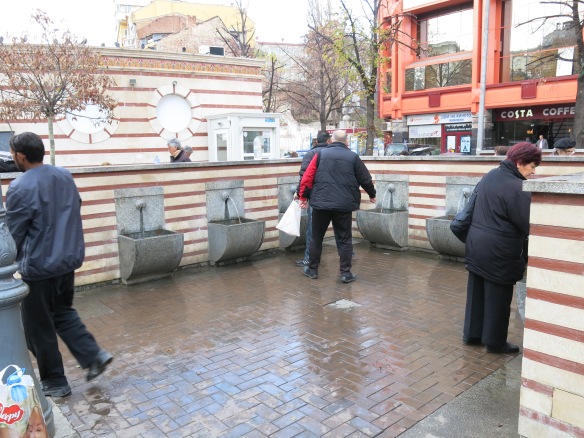 St. Sofia, the church from which the city took it’s name 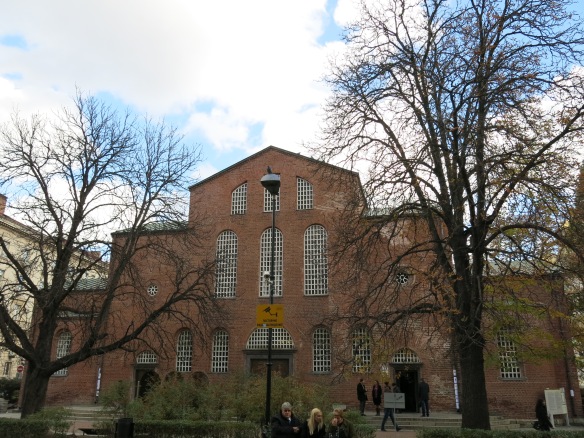 Cleckshop (translation is Squatshop).
After the fall of communism, many people converted storage units in the bottom of their apartments into little shops. As they’re partly below grade, you need to squat down to pay and collect your purchase. 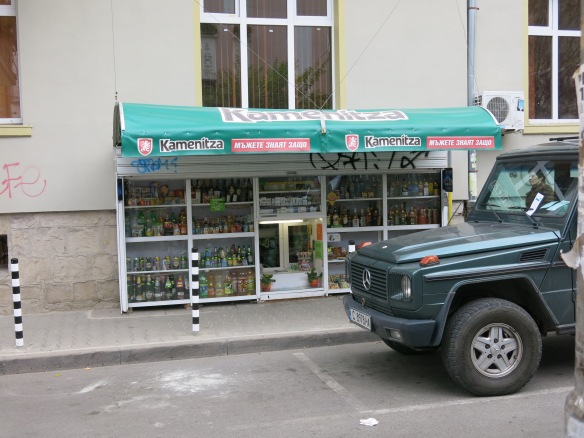 There’ve been lots of protests around Sofia recently. Seems like everywhere I go, people aren’t happy with their government officials. Cops are out everywhere…mostly just smoking cigarettes and texting…it doesn’t appear to be violent.
One very vocal protest had some sweet cardboard tanks…another less vocal one was a photoshopped picture of the Prime Minister. 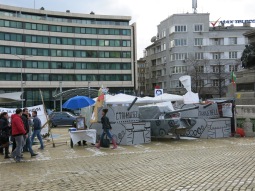 Today, I left Sofia, heading towards Istanbul. My plan was to ride two passes, one of which has this crazy monument called Buzludzha on the top, then stop somewhere for the night near the border, as the trip to Istanbul will take two days.
I was pleasantly surprised by passing two other massive monuments on the way to Buzludzha. I think that the communists’ best skill might’ve been building magnificent structures in the middle of nowhere.

The first was Beklemeto, built for Russian and Soviet Liberators. One side displays the year 1878, when the Russian army captured the pass, helping to liberate Bulgaria from Ottoman rule. On the other side, 1944, memorializing the anti-fascist resistance. Apparently there was an eternal flame here that was less than eternal. It went out years ago and was never relit…

Next surprise, Shipka Memorial…
This one is a memorial to the people who died on Shipka pass in 1877 and 1878 during the liberation of Bulgaria. I met an old Russian guy here who’s grandfather had died here. 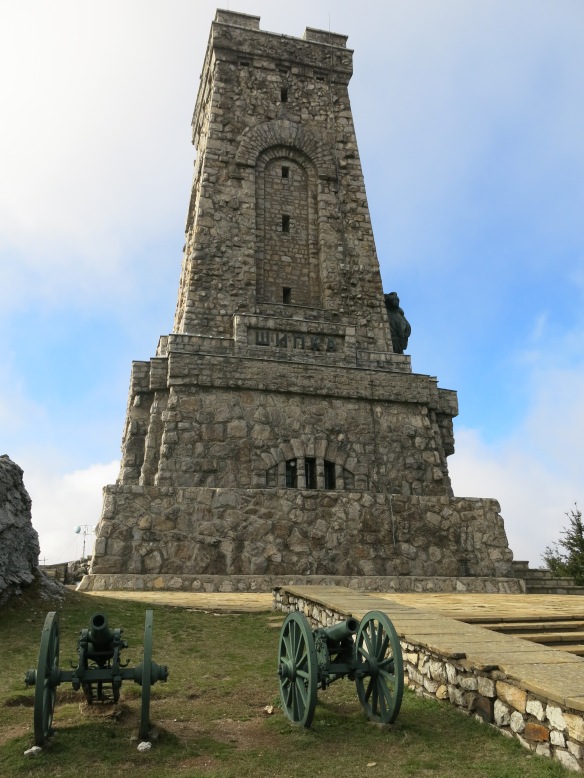 Inside, you can climb up to the top, and on the way, find various artifacts from the war.

OK, the place that I really wanted to check out, and one of the most strangely fascinating things I’ve ever seen…Buzludzha.

It was built in 1981, commemorating the events of 1891, when the first organized socialist movement started forming and secretly meeting in this area. They chose a good place to meet in secret, because there isn’t anything around here besides this massive UFO looking structure.
The monument was inaugurated by Todor Zhivkov, leader of the Bulgarian Communist Party. In 1989, he stepped down, and in 1991 the communist party handed the monument over to the state, and it’s been abandoned ever since.

Luckily someone made this little entrance

Ceiling in the main room

Downstairs (this area was pitch black)

Tunnel to the tower, with just enough room to get through the door (pitch black, and as one might expect, also a little creepy)

Series of ladders going up the tower in complete darkness

Finally, some sunlight is creeping in

View from the top

And to finish off this great day, shortly before stopping, I saw something that’ll probably never happen in the US. I was at a stoplight, directly behind a cop (he was first in line). Throughout Macedonia and Bulgaria, lots of the lights have timers above them, so you know how long they’ll remain red or green. When the timer read 6 seconds, he started revving his engine. With about 1.5 seconds to go before the light turned green, his wheels started spinning. He wasn’t moving, and never ran the red light, so I suppose this makes it legit? After a second or two of squealing the tires, he took off at full throttle, up over 100kph through the city. No lights, no sirens…I think he was just enjoying the afternoon.

Tomorrow, I should (as long as everything goes as planned) make it to Turkey.
Text on a screen can’t express how excited I am about that