For a while now, I’ve been excited to get past Germany. There was a lot that I wanted to do up to that point, and I’ve had an amazing time up until now, but I felt like leaving would be a bit of a turning point for me, for a few reasons. First, I don’t have any friends to go visit anymore, so everyone is new, at this point. Similarly, everything is new…I spent a couple weeks in Germany a few years ago, I understand a tiny bit of German (and speak even less), so it’s not as big of a challenge as other places could be. And finally, though this is purely speculation on my part, I feel like things, as a whole, are going to be getting more different than I’m used to, having spent my first 30 years almost entirely in the US.
So, off to the Czech Republic I go!

One thing that’s still missing from the increasing challenges (though it’ll come soon enough) is border crossings. Going through a lot of countries in Europe is like passing through states in the US. I even stopped at the border when I got into the Czech Republic to pick up a vignette, which I kept seeing signs for, but it turns out I’m exempt on a bike…sounds good to me!

Getting into Prague and navigating towards my hostel gave me a little ego check. I think I’d gotten a little over confident in my hand written directions that I’d been using to find my way through cities (as I’m carrying maps that don’t always go into detail on cities), and didn’t include all the details that I probably should have. It became clear that I was a little bit lax when I was about 2kms away, and on the other side of the Vltava River as my hostel. Some backtracking, some lucky guessing, and maybe a slightly elevated (as of late) directional intuition got me there after about a half hour of sliding around on the uneven brick roads in the rain.
This hostel was pretty cool…they had secure storage for my bike for the 3 night stay…just drive it in the front door and park in the lobby.

Prague was an interesting place. It was packed with amazingly ornate buildings…the attention to detail on them is stunning. Probably more so that anywhere else I’ve been. Yet it still felt like there was a little USSR hanging over it all, maybe it was preconceived, maybe it was honest, but either way, it was my feeling. 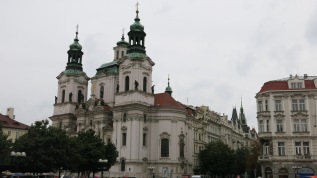 Massive Cathedral by the Prague Castle

Nothing like a couple ultra-violent statues adorning a gate…

I got a photo of this old Jewish cemetery through the gate…headstones here are packed in like you wouldn’t believe. When they couldn’t afford to expand the already full cemetery, they expanded up (or down?) instead of out. Supposedly the dead are up to 12 deep in some places, which explains why there are so many headstones in such a small area. 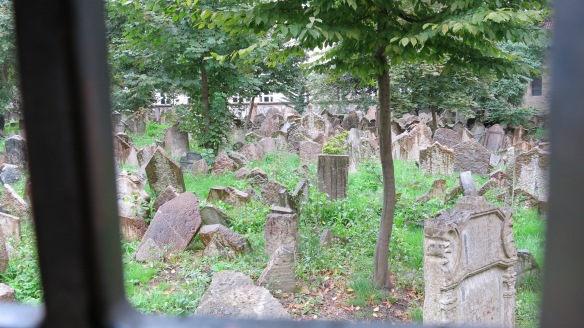 In the middle of Prague is this astronomical clock. It was built in 1410 and is the oldest one in the world thats still functioning. I heard it go off at 11:00…it was basically like any other bell tower, but surrounded by a LOT more people.

This poster made me laugh

There a famous Czech artist named David Černý that has quite a few pieces on display throughout the city. His work is fairly controversial…some find it offensive, some are impressed that he’s pushing the boundaries. Maybe I’m simple, but I just find it entertaining.
One creation that is bound to be seen by just about everyone that visits the city is “Tower Babies.” The Žižkov Television Tower was built in 1992, and in 2000, Černý sculpted a bunch of babies that were attached to it, as though they were crawling on it. At first a temporary installation, they later returned permanently in 2001. Offensive-no, weird-yes.

“Piss” is another of Černý’s sculptures. It features two guys standing face to face, peeing into a pool in the shape of the Czech Republic. If that wasn’t enough, they also move around, so as they’re peeing they write out quotes from famous residents of Prague.

One more sculpture of his that I saw was of St. Wenceslaus. At the end of Wenceslaus Square is the massive, and famous statue of St. Wenceslaus, sitting a horse. A few blocks away, in a shopping area just off of the Square is Černý’s rendition…a picture is all that’s necessary.

This moving sculpture is atop a hill in a large park in Prague. The pendulum swings back and forth, moving the long metronome-like arm slowly back and forth. Not that exciting compared to the work by Černý, but whats interesting about this is that it’s built in a spot that formerly was the largest statue of Stalin (which was blown up with 800kg of dynamite in 1962)

This is totally random, but I couldn’t get over it…Lots of the roads and sidewalks here are brick, with large, deep gaps inbetween the bricks. Despite this, I saw TONS of women wearing high heels. As someone who only wears high heels on the most special of occasions, it was unbelievable to me that they didn’t all have broken ankles due to slipping into the massive crevasses between bricks.