Auschwitz…as expected, it was spooky and depressing in a way that words can’t describe.  I don’t think I’ve ever been anywhere that weighed so heavily on my mind, and it continues to after leaving. 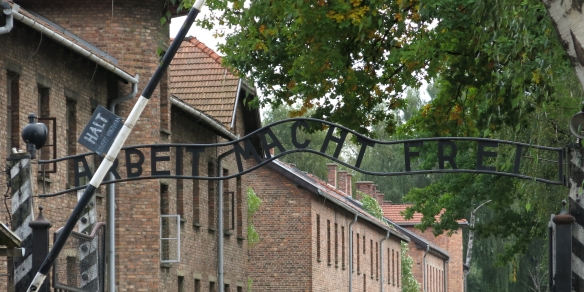 Visiting the Dachau concentration camp a few years ago was rough, but Auschwitz was on a whole different level of scary.
I think what hit me the hardest was the fact that it was an extermination camp, not just a concentration camp. The majority of people brought here were sent straight into the gas chamber. In total, over 1.1 million people were deported to Auschwitz. Of them, 900,000 were murdered on arrival. Most of those that were killed immediately were the elderly, young children, disabled, and pregnant women. It was mostly healthy men that were spared immediate death, but of course, you could argue whether their fate was better or worse. For those that made it past day one, men had a six month life expectancy, women had 2-3.
Of the three gas chamber/cremtoria structures, two have been destroyed.

The third was still standing, and able to be walked through

One of the train cars used to bring in the prisoners. 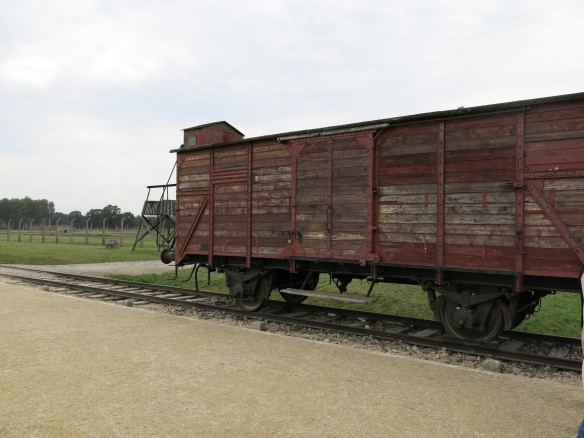 The Wall of Death, where executions by firing squad were carried out. 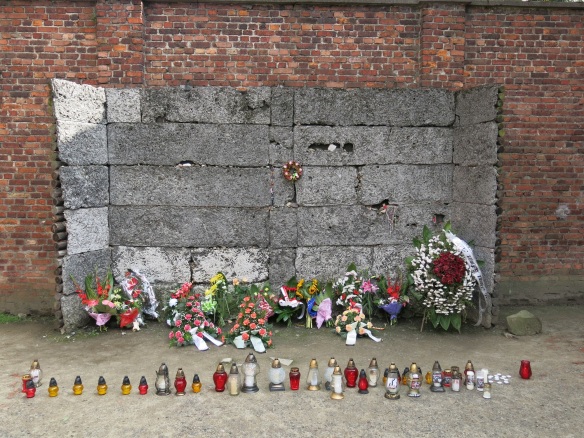 Early on, the prisoners living quarters were built from brick that was salvaged from the houses that were torn down during the camp’s construction. After running out of bricks, they started bringing in prefabricated horse stalls from Germany to house the growing number of prisoners. Not many of these are still standing, but the number of them can be somewhat understood by seeing the still existing foundations and chimneys that seem to go on endlessly.

Empty cans of Zyklon B, which was used in the gas chambers. I remember being told that gas would be pumped into the rooms, sometimes through shower heads. This actually wasn’t true. Cans of Zyklon B (which came in the form of small pellets) would be dumped through holes in the ceiling, and the ceiling was then plugged, the pellets released the fumes that ultimately killed the prisoners. The purpose for utilizing Zyklon B was to reduce the number of bullets used in executions.  Bullets were expensive and could be better used at the front lines. It’s absolutely mindblowing to think that there were so many executions occurring that they had to come up with the most economical way to do it.

In a couple of the buildings you can walk through, they have on display many of the possessions that were brought into the camp, most of which would’ve been immediately taken away. The sheer number of items (shoes, suitcases, hairbrushes, glasses, etc) they had piled up just further emphasized how many victims were brought to Auschwitz.

Wilhelm Brasse was a Polish photographer imprisoned at Auschwitz. He was ordered to take various photos around the camp for documentation, but primarily he was to take portraits of prisoners for record keeping. He estimated that he took 40-50,000 portraits, and today, they have an entire hallway that is filled with them.
A tiny fraction of what is on display… 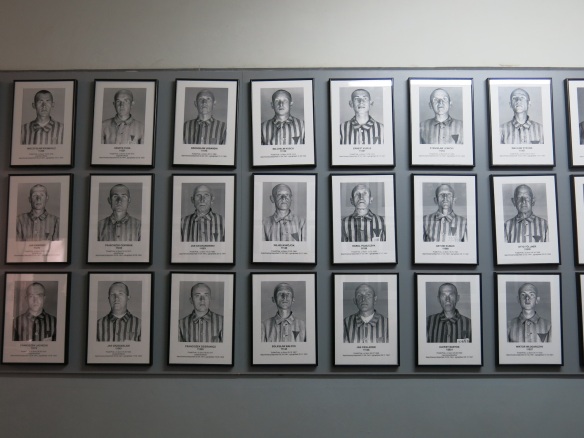 After the war, Brasse lived to be 94 and never took another photograph.

On the train ride from Krakow to Oświęcim, I met a guy from Toronto named Irv, who had a pretty intense connection to this area. His mom and dad were both survivors of the Holocaust and were imprisoned in concentration camps, his dad is a Ukrainian Jew, and his mother a Polish Jew (and his mother-in-law is a Hungarian Jew that was deported to Auschwitz and imprisoned there until it was liberated).  Growing up, his family consisted of his brother and parents, no one else…everyone had been killed…no grandparents, no aunts and uncles.
Being at the site itself would’ve been powerful enough, but Irv’s stories from his parents childhood made it that much more intense. Hearing an individual’s story seems to make a terrible event like this hit home a little more, and he had two unforgettable ones.
On the day his mother’s concentration camp was liberated, she was meant to be killed. While being marched to her death, along with a number of other children (she was 11), an allied mortar struck the wall they were walking against, and a section collapsed onto the commandant that was leading the march.
Prior to being imprisoned, his father went through what I think might be one of the most terrifying and inhuman moments I can imagine. During the fall in Ukraine, his father (11 or 12 at that time) was being hunted and ended up being caught. He was approached, with a rifle barrel pointed at his chest, expecting the end at any moment.  The barrel was pushed against him for a moment, then the gun was lowered. Maybe for a split second one might think this was done out of some tiny sliver of humanity, until the man whispered, “I’m going to let the winter get you.”
Obviously, the events that happened here were atrocious on a level that, luckily, most of us will probably never know.  But for me, what’s equally as terrifying about what happened here is that it’s happened again since, and is still happening now.