Skip to primary content
We met up on Sunday morning (5 bikes) to head up to Brno.  Being that it’s an opportunity for people to ride on a race track, there were obviously mostly sport bikes up there, so I (wearing cordura/goretex riding gear) looked a little bit out of place on an Enduro wearing panniers.  And the Colorado license plate didn’t lessen the surprised/confused looks that I seemed to get. 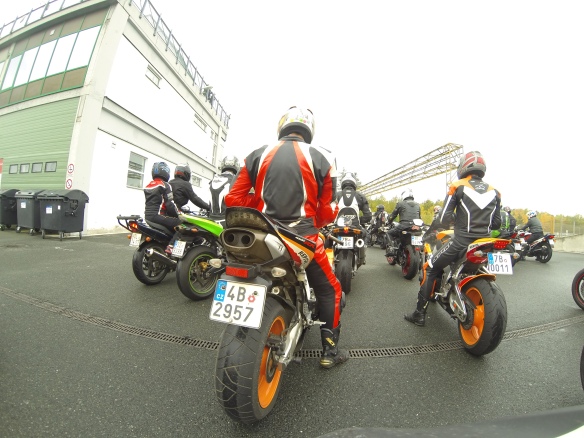 First thing, we got signed up to ride the course.  $5 and a signature on a document I couldn’t read got me 30 minutes of riding time with maybe 40 other bikes.  The worker explained to me that we could reach speeds up to 80mph, and wanted to make sure I’d be comfortable with that…sure…that actually seems a bit slower than I expected.  Once we got on the track, I think everyone had gotten over 80mph before the first turn…that’s a bit more of what I was expecting.
The course is 5.4km long, so within a few minutes, the pack had thinned out a bit…sometimes to the point where it felt like I had the track to myself.

I was pretty proud of the fact that I passed a Ducati Monster and a Honda CBR 600…something that shouldn’t be possible on my bike with dual sport tires.  But I also managed to get lapped towards the end of the 30 minutes by a few fast guys on fast bikes.  Hearing them scream by and seeing them disappear around the next corner in a hurry definitely made me feel like I was standing still.

My camera had gotten a bit wet, so the quality isn’t too good, but these 4 pictures were taken at .5sec intervals
Following the track time, all the riders there gathered to ride a commemorative lap in memory of Marco Simocelli, a MotoGP racer that died after an accident in 2011.  I think there were about 3000 bikes out there, which pretty much packed the entire length of the course.

Three of the guys did another 30 minutes on the lap, but I opted to not push it, and take photos instead…

And speaking of pushing it…here’s a Honda that barely made it home. 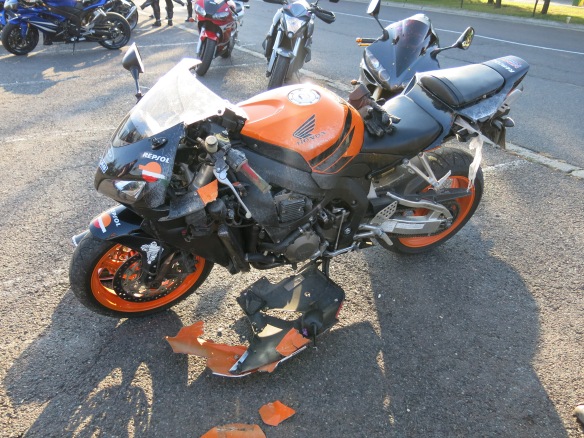 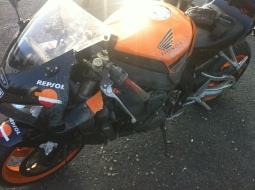 I believe it was on the last lap, and he went into a turn a little too hot.  Quite a bit of damage to the bike, a pretty beat up leather suit, but luckily no injuries.
We cleaned up the bike a bit…luckily I had left my tools and supplies in my panniers, so we patched it up with some duct tape and zip ties.  And despite running a little bit rough, we still made it back home…uh, sorry…to the wine bar.