After two days in Albania, I consider myself a total expert, and I’m a bit torn between the two extremes of the place. The views of the mountains, and the riding in them was great…from 2nd gear on dirt and loose gravel, to 3rd gear on twisty paved roads with very unpredictable and frequent changes in quality (just to keep things exciting), to 6th gear, wide open, 100+mph riding on an empty highway without so much as a crack in the pavement. Every mile was astounding…and I even had a 3 hour ferry ride on a beautiful lake in the mountains.

So, what’s the other extreme? Tirana. After a few days away from any cities, I decided I’d check one out. Tirana was a reasonable distance away, so it won.
As I left the endless beauty of the mountains and entered the seemingly endless no mans land between city and countryside, I was greeted with two smells. The majority of the time it was trash, but occasionally I’d get some relief when I’d catch a lovely whiff of burning trash.
And something didn’t make sense in this country to city transition. Every 100m there was a gas station and “bar kafe” (and some had a hotel, for those of you who love the smell of trash). The two I stopped at had more employees than patrons, and the couple patrons in them just seemed to be the employee’s buddies that had stopped by to shoot the shit. I don’t understand how the market wasn’t saturated with this type of business when only a quarter of them existed.
And once in the city, the gas stations were swapped out for 3 different kinds of stores…mobile phone shops, cigarette shops, and travel agencies.
The phone shops seemed to be filled with people just hanging out, the travel agencies were empty, but the cigarette shops had legit customers.
If you find yourself needing a trash can, don’t bother looking. When you find one, it’ll be overflowing. But fear not, the sidewalk would love your empty pack of cigarettes.

Ok, I better say one nice thing (backhanded?) about Tirana…the traffic is a clusterfuck, which at least keeps the city riding pretty entertaining and exciting. A three lane road will easily accommodate 5 lanes of traffic, and making a turn from anywhere other than the left or right lane must be required teaching in driving courses. Oh, and in case anyone out there didn’t know this, if you’re 12th in line at a stop light, and the light turns green, but you (12th!) don’t start moving IMMEDIATELY, make sure to honk your horn a bit…it’ll really get you moving…

***PAUSE***
As I’m typing this, a commercial just came on TV about cleaning up trash and not littering. It featured what I’m guessing were members of a soccer team, and a few really hot female doctors with stethoscopes around their necks picking up litter in a field that was clearly dumped there for the ad…I’m confused why they didn’t just bring them to an actual park and pick up real litter…?
***UNPAUSE***

So, my advice on Albania…definitely go, and definitely don’t go to Tirana.

New topic…Booze…
Throughout the Balkans, rakija (basically schnapps) is consumed very casually, at any time during the day. In Montenegro, while having breakfast one morning, two police officers sat down beside me. Just as casually as two cops back home would order a couple coffees, they started their day off with shots of rakija.
The next morning (now in Albania), I left my hotel room to get breakfast in the attached bar. When I left the bar the night before (at 9:00) there were only two patrons still there, who appeared to be about 40 and 60, and were celebrating the end of their work week. In the morning, they were still there, in there same spots…it almost felt like I’d only left for a couple minutes to go I the bathroom.
As I sat in the bar, waiting to catch a ferry out of town, numerous people came through, primarily for a bit of rakija to start the day.
And to further highlight the casually attitude towards drinking, here’s the ferry captain’s beer.

Alright, here’s a load of pictures. Yesterday, I left Montenegro and rode through Tara Canyon…it’s huge (4265ft at the deepest, and 50 miles long). These don’t give a good impression of it, as they weren’t taken in the heart of the canyon. I was having too much fun riding that section and didn’t feel like stopping. 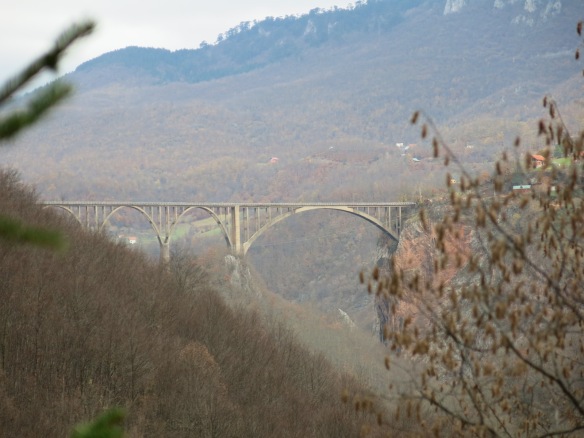 About two miles after crossing into Albania, the road turned into this…the second gear gravel mentioned before. 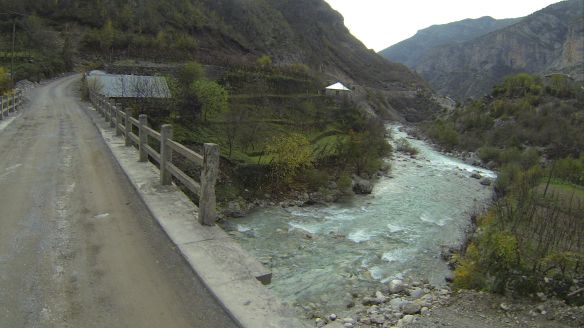 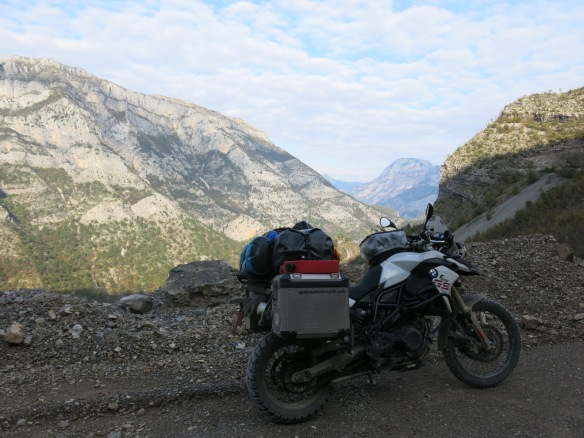 Bridge with water above and below?

Next morning on the ferry across Lake Koman 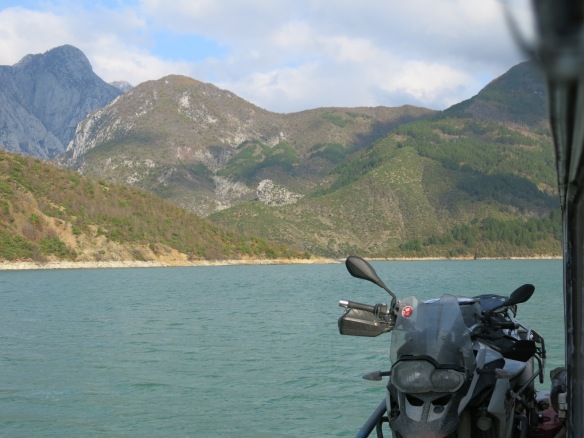 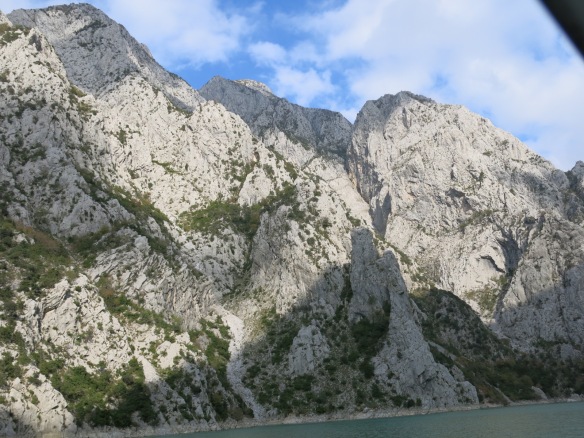 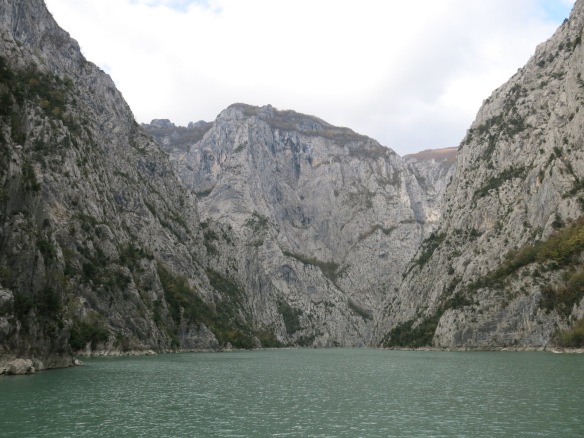 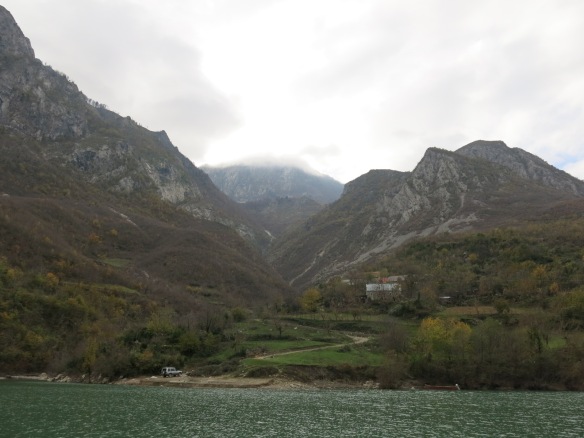 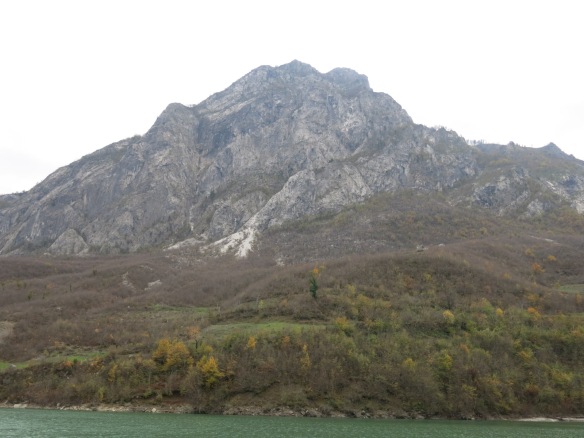 It took a little bit of swearing, and a bit more pushing to get from this picture to the next. 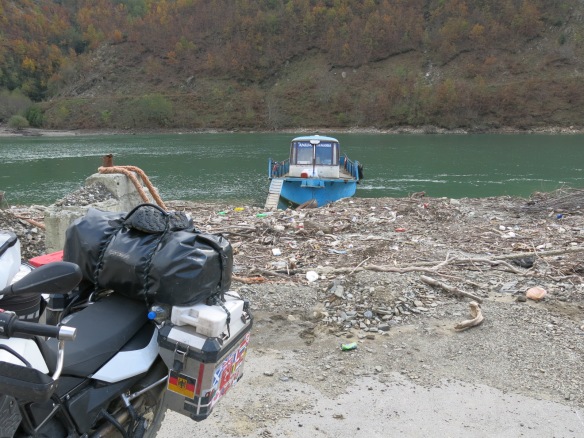 This road needs a little work

Looking back on Lake Koman 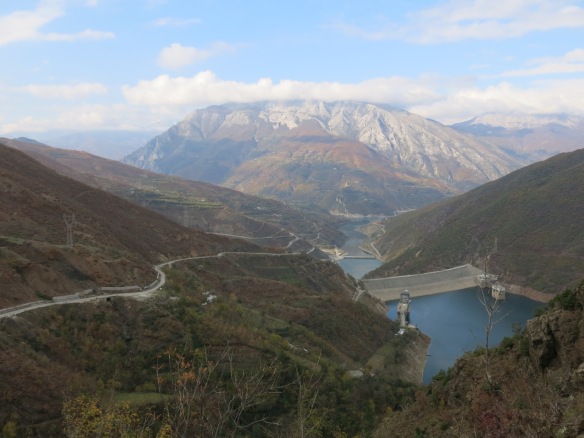 3rd gear riding on a road that switches from good pavement to potholed pavement to good gravel to rutted gravel.

Whats more dangerous?
Riding a motorcycle in Tirana, or a carnival ride in Tirana?