The original Galata Tower, built in 528, was used as a lighthouse and as the northern end of the “great chain”, which was stretched across the golden horn to prevent enemy ships from passing. It was destroyed in 1203, during the 4th Crusade. In 1348, the tower was rebuilt at a slightly different site (this is what still stands today) and called the Christea Turris, or Tower of Christ, but today is referred to the Galata Tower.

There’s an interesting story presented (as fact) at the tower…Hezârfen Ahmed Çelebi, who (sometime between 1630 and 1632) supposedly flew from the top of the tower, using “eagle wings,” and landed across the Bosphorus River, six kilometers away. Sultan Murad Khan witnessed the flight, gave Çelebi a bag of golden coins, then exiled him to Algeria, saying “This is a scary man. He is capable of doing anything he wishes. It is not right to keep such people.”
Call me a skeptic, but I’m preeeeeettttty sure this is bullshit…first, there’s only one person that reported this event, and second, the world record wingsuit flight (set in 2011…maybe it’s been broken since) required 9200 vertical feet to traverse 7.5 kilometers. Supposedly Çelebi traversed 6km with less that 100 vertical meters.
And another somewhat related story, just because it’s hilarious…Lagâri Hasan Çelebi, Hezârfen’s brother (the Wright Brothers didn’t have shit on the Çelebi Brothers), achieved rocket flight in 1633. Using a winged suit with a rocket containing 140lbs of gunpowder, he launched himself into the air nearly 1000 feet (who knew there were such accurate altimeters in 1633!), landed in the sea, and safely swam back to shore. Unfortunately, he only received a bag of silver from the Sultan, but at least he wasn’t deemed crazy enough to be shipped off to Algeria.

Sadly, on the day I went, there were no close calls with battleship passing near the tower, and surprisingly, no one flew from the top…all I got was a nice view of Istanbul from above. 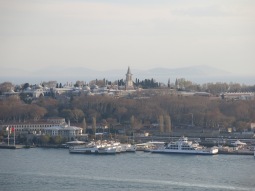 While walking around Istanbul, it’s impossible not to be approached by various purveyors, whether they want to sell you scarves (for your mother or “girlfriends”), lamps, or get your into their restaurant.
Responding to them will only get you cornered, and questioned about where you’re from. Once you give this crucial piece of information, they’ll quickly respond that their brother/sister/cousin/uncle works/lives/goestoschool in whichever location your provided. Apparently that connection actually gets people to buy rugs??
So, the best tactic I’ve found is to just ignore them, which can sometimes even provide hilarious results…

“Excuse me sir, the grand bazaar is this way”
Silence
“Sir, you look like Chuck Norris!”

“Would you like to sample some Turkish delights?”
Silence
“They have zero calories!”

And perhaps my favorite…This guy was trying to get me to come into his shop to buy Turkish delights (I think?!)
“My friend, I can change your life.”
Who knows if something other than Turkish delights was being implied, but I wasn’t interested enough to stick around and find out.

In other news, I have arranged my flight to Mumbai, and have everything (I hope!) lined up to get my bike there as well. It should arrive the day after I do. For now, my bike’s parked at a warehouse near the airport, and so far the process has been much easier than expected…let’s hope it keeps going smoothly and I can get through customs in India without any huge hangups!

Time to get out of Istanbul for a couple days, but first, here’s a few more pictures I liked.