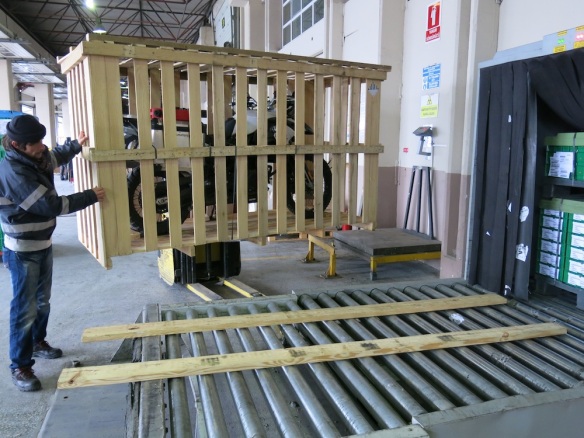 I’m excited mainly because I don’t really have any idea about what to expect.  I’ve never been there, but of course know plenty of people that have, so I’ve heard stories and descriptions…it’s beautiful, there’s poor people, traffic is bad, people are wonderful, food is good, it’s dirty, at some point you’ll feel like shit. I’m excited to finally experience it (minus needing to be within arms reach of a toilet) because it seems to be a place where words can’t fully describe it (or at least the intensity of it)…it sounds like one needs to go there to really understand it.

I haven’t actively researched a single thing to go see.  Sure there are some things we’ve (speaking for those of us who haven’t been or haven’t carefully planned a trip there in the near future) all heard about, but that’s the extent of my knowledge going into it.

A week or so ago, I planned a very rough route from Mumbai to Kathmandu, and on Saturday, I managed to bring that route from 30 grit to about 60 grit…and I’m sure it’ll change within hours of arriving.

So right now, the plan is…
1. Get my bike through customs in Mumbai (hopefully on December 12th)
2. Take a photo of the Taj Mahal
3. Enter Nepal sometime in late January
…all the while maintaining clean pants despite bad water and scary traffic.

I spent yesterday going back and forth between the warehouse were my bike was to be crated, and the cargo terminal where it would be shipped out of, discussing what I needed to do with the bike, and what paperwork was required. Throughout the process, the most clear communication was with one guy who started learning English six months ago, which really added to the challenge.
When it came time to leave, I needed to figure out where I’d be leaving my bike…either at the loading area or airport. This guy didn’t seem to understand my question, and rather that working towards some level of clarification, he instead decided to give me a tour of the loading docks, along with some history of the building and what everyone was up to. He also continued to point out how he liked to call the place “boy’s hell” because no females worked there. At one point, his radar must’ve gone off as he excitedly pointed out the lone woman employee from across the yard. All the while, I’m continually (and nicely) trying to ask him where I can park for the night…I guess I just don’t have a strong passion for learning little facts and tidbits about the Ataturk airport cargo terminal.

While waiting for my flight out of Istanbul, I ran into my French biking friends that I saw in Croatia, Albania, and Macedonia. They’re on their way to Bangkok to bike around SE Asia, so we figured that if we’ve randomly crossed paths four times now, we’ll probably meet again in Cambodia or something.

Leaving Istanbul is kind of hard…I’ve loved everything about the place. Maybe when I’m old and ready to go, I’ll take out the biggest loan I can that can’t be passed on to my next of kin, head to Turkey, and spend my days reading my favorite novels, drinking Turkish coffee, and smoking nargile.