I’m still in Mumbai, waiting on my bike…here are some more pictures of the city… 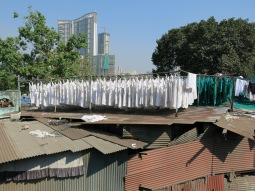 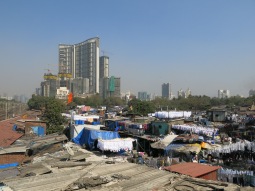 Haji Ali Dargah Mosque
This mosque contains the tomb of saint Pir Haji Ali Shah Bukhari. Apparently he died while on pilgrimage to Mecca, and his body floated back to this spot, so the mosque was built here.
More interesting than the mosque itself was the fact that it was completely surrounded by massive amounts of trash. 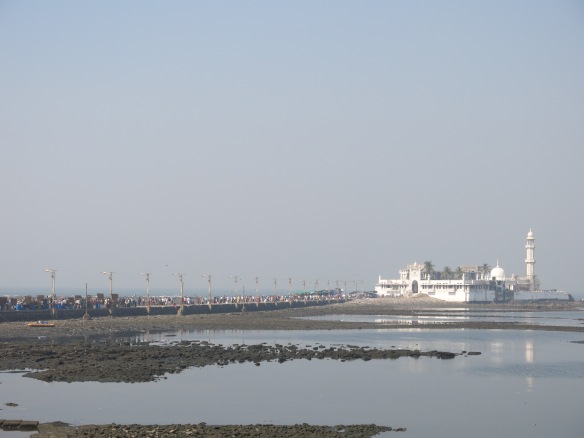 Bombay Panjrapole
In the middle of a market there is this small, and strangely silent cow sanctuary.
During the 18th century, the British were trying to control the stray animal population in the city by killing them, so this area was designated as a safe house for homeless cows. The immediate silence experienced when entering the area makes you feel like you’ve been teleported to a different planet, in comparison to the constant noise and rush in the rest of the city.

Dharavi Slum
60% of Mumbai’s population lives in slums, and Dharavi is one of the largest. More than 1 million people live in this 1.75sq km area.
Walking through it was interesting…As an outsider, there’s no real reason to go, so it feels much more real than what you’ll find around the tourist attractions. While walking through, I saw one guy who, like me, clearly didn’t belong there…we traded no words, just confused glances from across the street.
The most interesting thing to me was that poverty wasn’t as extreme as I was expecting…that may sound stupid, because it was definitely poor, but what I mean is that it wasn’t as obvious and depressing as the poverty and homelessness you see out on the streets throughout the city, where people’s only chance at a meal comes from you handing them food or money. In Dharavi, sure people are financially poor, but at least most of them seem to have jobs. People were driving cars and motorcycles (not many, however), kids were leaving an English school as I walked by, dressed in nice, clean school uniforms. No one seemed desperate.
Near the school, three kids directed me around a corner to show me something…in the alley was a ferris wheel. This thing was about 12 feet high, with four seats holding two kids each, and was manually powered. A guy was standing next to it pushing it around and around, a quarter turn at a time. The kids riding it seemed to be having the time of their life, and the kids in line could barely contain their excitement knowing that their turn was coming up…so much for needing an Xbox One to keep children entertained.
While walking down one of the main streets, I saw three women on the side of the street, one was getting her nose pierced. One of them tried to wave me over, motioning that I should come over and get my ear pierced…no thanks…I’m OK taking the occasional gamble on street food, but I’ll steer clear of street piercings.
Throughout the time I spend in the slum, ZERO people asked me for money or food. More than anywhere else in Mumbai, people would give a big smile and a wave, kids would come up and ask simple questions (in perfect English)…where are you from? what’s your name? etc.
I guess I expected a slum to be filled with hopelessness and desperation, but it didn’t feel like that at all. But don’t get me wrong…A-life here didn’t appear to be easy, clean, or filled with a single bit of material excess, B-If you walk around other parts of Mumbai, you will find poverty in the hopeless and desperate category…and its depressing.
In regards to that level of poverty, when I see it, I want to (and sometimes do) give a little money or food to people on the street, but it’s sad to know that in one way, it really isn’t making any difference. It’s sustaining the problem, but definitely not solving it. Looking at it from a micro level, it’s probably a great thing…a few rupees doesn’t really mean much to me, whereas its a lot to them. But on a macro level, a few rupees doesn’t do anything…but there’s those certain people that look at you who you just can’t pass by without handing over what wouldn’t even buy me a pack of gum back home but will feed them for more than a day.

On the topic of poverty, the economic separation in the country is staggering. I heard that across India, the 30 richest people have the same wealth as the 300 million poorest…wtf. But it couldn’t be any more obvious than when you are standing near people that live on the street and looking up at this building… 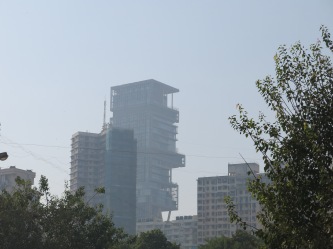 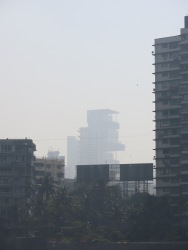 Thats a house.
Supposedly its the world’s most expensive, costing close to $2 billion. It’s 27 stories, and over 400,000 square feet. The owner is the richest person in India and lives there with his wife and three children. There are six stories of parking area below 27 stories of living space, 9 elevators, and 600 people employed to take care of the place.

Some random photos from around the city…
Cows! 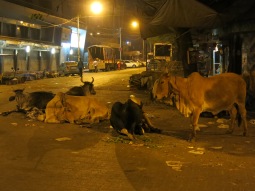 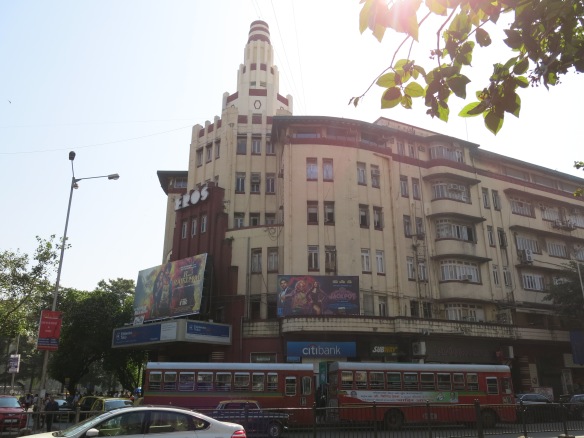 Who wears shoes while running a jackhammer?

Views from the train

Autorickshaws are everywhere…much like Tuk-Tuks in Bangkok, but in Mumbai, they’re a bit less customized.

The backs of them all say either “Keep Distance” or “Safety First”….suuuure 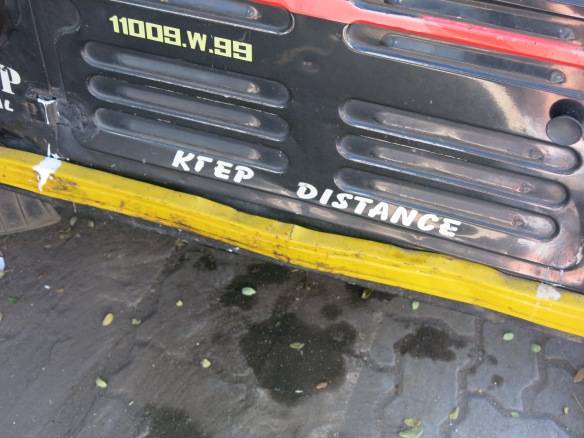 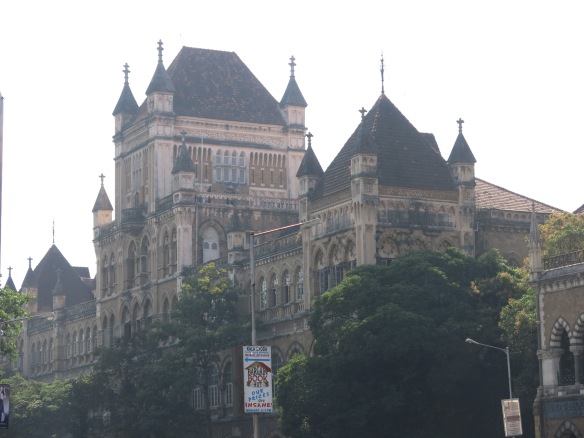 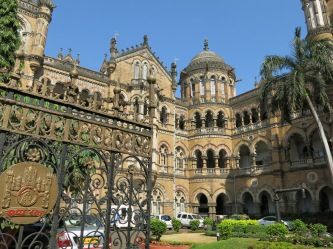 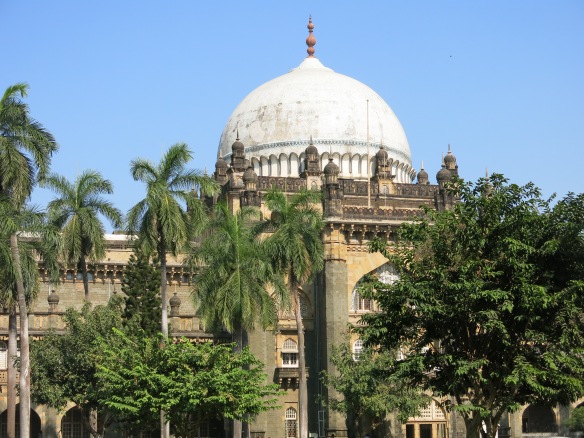 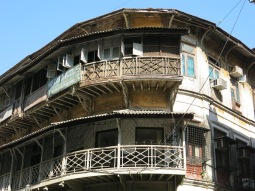 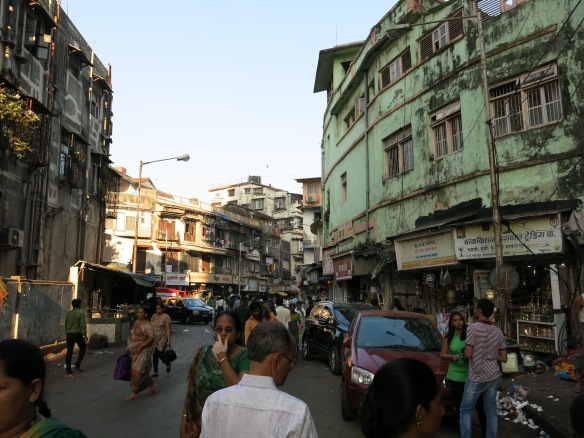