Of the many unorganized traffic situations I’ve found myself in in India, I think the railroad crossings confuse me the most. When the barriers are down, I’m used to all the vehicles staying in their lane and forming a nice orderly line. In India, cars and motorcycles (and occasionally, buses) quickly fill the empty lane, meant for oncoming traffic. Shortly after both lanes are packed up against the barrier to the tracks, vehicles spill over onto the shoulders of the road, and if the landscape allows, sometimes they’ll spread out past the shoulders. Once the train has passed and everyone is free to continue on their way, you have an instant and unnecessary traffic jam on your hands. Motorcycles end up making their way through the oncoming clump of traffic first, usually by bypassing far off the road to the left side. As far as the cars, buses and trucks, I’m gone before they work things out, and I’m glad I don’t have to be present to experience the frustration.
Here’s a particularly mild example of the situation.


After Mcleodganj, I moved on to Mussoorie…another town in the mountains, with some great views. 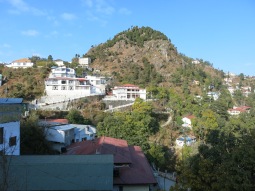 From the high point in the town, you can catch a glimpse of some of the higher Himalayan peaks off in the distance. 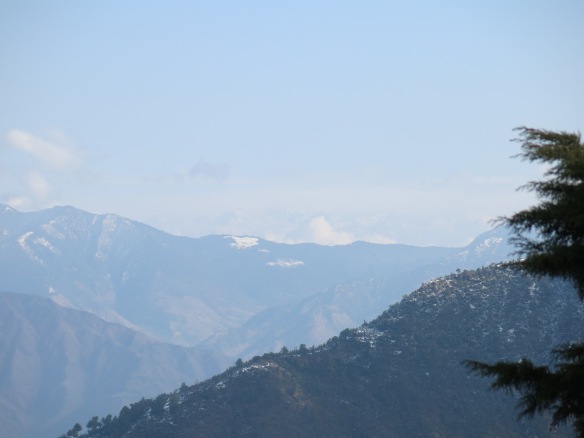 Woke up to a bit of snowfall, but luckily that was the morning before I left town, so I dodged having to ride through any bad weather on my way out.

Typically, it’s just the Indian guys who are interested in my bike, but this monkey also seemed pretty intrigued. 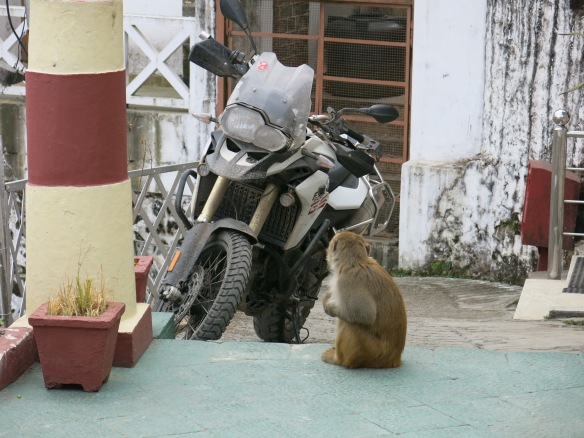 On my way from Mussoorie, I made a quick stop for lunch. This crowd of guys quickly gathered, interested in my bike.

At the same time, 4 women walked by, taking no interest in the bike, but curious about why this crazy guy was putting eyedrops in his eyes (I guess the roads were too dusty for my weak, delicate eyeballs). And one dog showed up, paying no attention to the bike or eyedrops, but was very interested in eating my leftover lunch.

The next day, I had an exhausting 11 hour ride to Varanasi. As physically and mentally exhausting as riding in India is on an average day, today was especially bad. For some reason, traffic was worse than usual…more cars were pulling out without looking for oncoming traffic, more vehicles were driving the wrong way down divided sections of roads, and I saw the aftermath of probably 7 or 8 accidents…a few rolled over trucks, a head on between two trucks, a head on between a truck and a SUV, and head on between a SUV and motorcycle..which sure contributed to making the day more stressful than usual.

Like yesterday, I made a quick lunch stop at a roadside stand that was selling samosas. When I finished the first one, I noticed a little pain by one of my molars. It felt a lot like when a popcorn hull gets stuck between your tooth and gums. So, I pick out whatever is causing the pain, and the first thing I think when I see it is that it looks like a bee stinger…a very small little sliver with a bit of a bulb shape at the non-sharp end…but of course I immediately dismiss that idea. I start in on my second samosa, and after one bite, I look down, and mixed in with the spiced potato goodness inside of it, I see four bees. Hungry as I was, there was no way in hell I was going to finish it.

When I finally got to Varanasi, I was exhausted from the really long day of riding, and really was just hoping to quickly get to my hotel. Unfortunately, the traffic was barely moving, and it took me an hour and a half to finish my last 6km. On top of that, the last few hundred meters was through a narrow and crowded alley. About 100m before my hotel, the alley got narrow enough that I couldn’t fit through with my panniers still on, so I had to stop and unload everything there. Once that was taken care of, I continued on down the alley, and again got stuck…this time I was about 10 feet from the entrance to the parking area, and the alley narrowed down to the point where my handlebars wouldn’t fit through.
So at this point, I turn the handlebars fully to one side, and recruit two guys at the hotel to come help me lift and drag the front end through the narrow alley.
FINALLY, the bike is parked and unloaded, and all I want to do to wrap up the day is clean and oil my chain. I go through the normal routine…put the bike in neutral, get it on the center stand, then start spinning the rear tire while spraying lube on the moving chain. The second time I grabbed the tire to give it another spin, I felt something wet…it didn’t take long to realize that I had rolled through a pile of cow shit while coming down the alley…awesome…
Thankfully, I had a little bit of scotch in my bag…a thorough hand washing, and 3 gulps of scotch was all it took to make everything right again.

Before going to bed, I walked down the alley to get a lassi (of the non-special variety). While sitting in the little shop, winding down, I heard some Hindi chanting coming from a ways down the alley, but obviously approaching. Within a few seconds, a group of about 10 guys walked by with a stretcher, carrying a dead body wrapped in bright orange and gold cloth, on their way to the Manikarnika Ghat to cremate the body. At this point, I don’t really know what to think anymore…time for bed…