Pai almost had me sucked in for an extra couple days, but Bo and I decided to stick with our plan to stay there for 3 days. We headed back to Chiang Mai, and then split and I continued north to Chiang Rai.

I only stayed in Chiang Rai for one night and the main thing I wanted to see was Wat Rong Khun, otherwise known as the White Temple. This one is rather new…it was designed in 1997 and parts of it are still under construction.

It doesn’t take visiting many temples for them to start to blend together. Before long, one loses the desire to keep going to all the temples in every city they stop in. However, Wat Rong Khun is the exception to this, and it shouldn’t be missed, as is definitely unique. 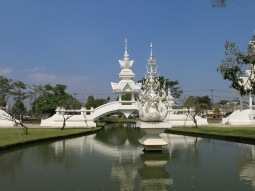 As you walk towards the entrance to the actual temple, you’re creepily greeted by hundreds of hands reaching out of the ground 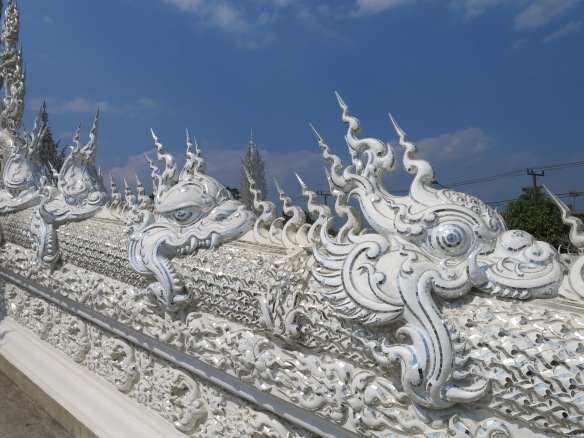 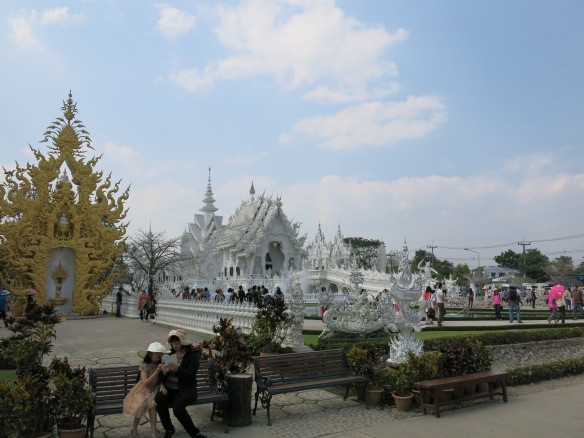 There are a lot of pieces throughout the temple grounds that you wouldn’t expect to be here. And inside the temple itself (unfortunately, you can’t take pictures inside), along with the typical paintings you’d expect to find, there are also murals depicting current events and various movies. You’ll find fighter jets launching missiles, the twin towers (one on fire, one about to be hit by a plane), Star Wars characters, Spiderman, Neo (from the Matrix)…basically a bunch of stuff that seems a bit out of place. And it’s not just the paintings inside that can be a bit strange…some of the sculptures throughout the grounds were a bit surprising. 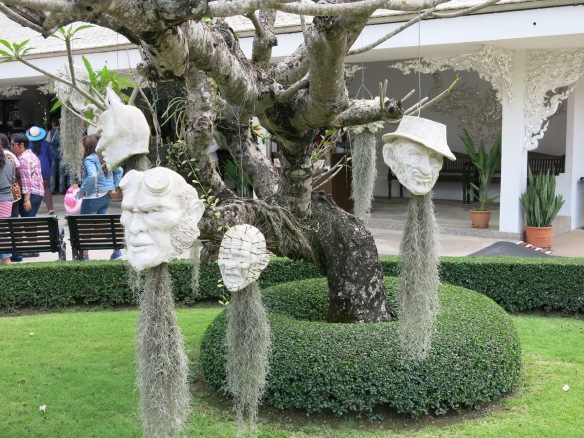 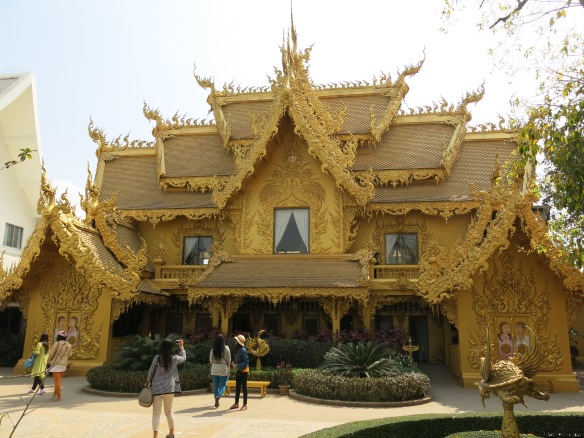 From Chiang Rai, my plan was to head to Laos, through Vientiane, which I figured would take about four days. I was pleasantly surprised to find that it only took two long days (again, of great riding) to get to Nong Khai, which is my last stop in Thailand before heading into Laos tomorrow morning.

I had some route suggestions from the guys at the BMW shop in Bangkok, which I used to make my route to Vientiane. Starting out from Chiang Rai, I was immediately happy with the suggestions. 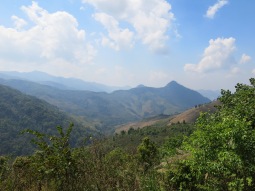 Shortly into my second day, I had to take a ferry across the Sirikit Reservoir, starting at the Ban Pak Noi fisherman’s village. 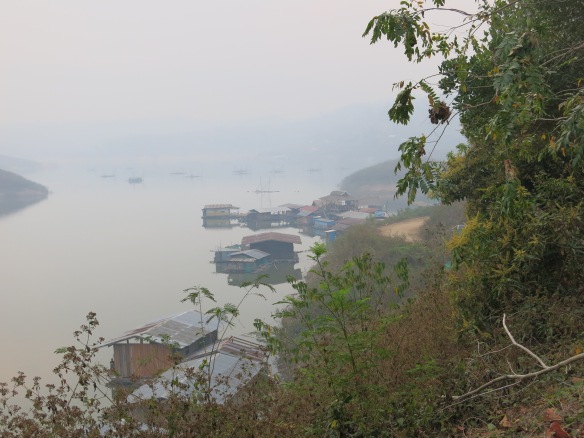 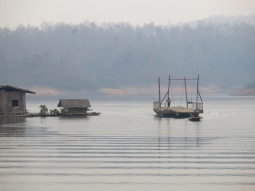 Off we (or I, rather) go, with the barge being pulled by this rather small boat, piloted by a kid who doesn’t seem old enough to have this job, connected by a rope that wasn’t much thicker than a piece of floss. 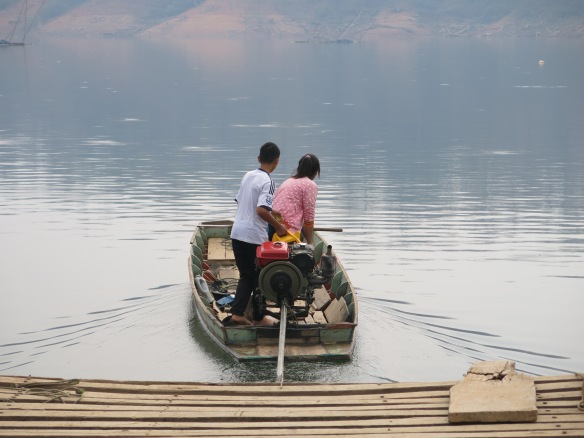 The rest of the riding for the day was great, which I’ve grown accustomed to during my time in Thailand. I didn’t really stop for many photos as:
A – I wanted to get a lot of miles in
B – I was having too much fun riding to think about stopping

I think I can say that Thailand has provided the best (and most consistently great) days of riding I’ve ever had.
This is the best way I can describe how wonderful it is…
Take a nice mountain road in the US that you enjoy riding:
1 – Widen the road a little bit, not to the point it feels like an interstate highway, but just enough to give yourself a little more room to work with.
2 – Keep the quality of road surface as good, or maybe even make it just slightly better.
3 – Increase the radius of switchbacks just a little bit. Before Thailand, I’d gotten sick of hairpin turns, as some of them are so sharp that maneuvering through them feels about as exciting as pulling into a parking spot at the grocery store.
4 – Make the switchbacks far more steep. Nothing feels better than coming out of a tight turn in second gear with the throttle wide open as your haul ass up what might as well be the side of one of the great pyramids.
5 – Remove all the slow traffic in front of you. At home, you too often find yourself stuck behind a line of painfully slow cars, wishing you didn’t have to crawl through these great turns at a snail’s pace. Here, if you find yourself behind a car or truck, they’ll make sure you’re able to pass within a few seconds.
6 – Remove 3/4 of the traffic. Nothing beats the feeling of having a great stretch of road to yourself.
7 – Make the hills steeper. Like the switchbacks, it fun to fly up steep hills, but it’s also great to cruise down a unbelievably steep hill filled with nice gentle curves, not even considering the throttle, but constantly grabbing for more brake to fight off gravity.
8 – Remove speed limits.
9 – Adopt a semi-lawless and semi-chaotic driving style, but with all drivers being reasonable, courteous, and attentive.
10 – Make sure that the temperature in February is 80-90 degrees Fahrenheit.