I wish I had a more exciting story to go along with the picture, but all I have is this boring explanation…
I stopped to take a pee. I flipped the kickstand down with my foot. The kickstand hit a rock and bounced back up. I assumed that the sound I heard was the kickstand settling into the “down” position, rather than “up”. I started to lean the bike over to the left. By the time I realized the bike was leaning way too far over, it was too late…With every degree it leaned over, the bike got heavier and heavier (my buddy, Luis, who I met in Luang Prabang would call my bike “The Elephant”, and that’s what it was starting to feel like at this point). There was no way I could stop it, so the only option was to just slowly lower it to the ground.
Fortunately, no one was present to see my stupid mistake.
Unfortunately, no one was present to help me pick up my stupid mistake.

While on the topic of unfortunate situations, I hit a massive pothole a couple days ago, and this is what my front wheel had to say about it…

OK…on to the good things…
I took two days (and a very indirect route) to ride from Luang Prabang to Phonsavan. I rode quite a bit on some fun dirt roads, which was nice for a change. 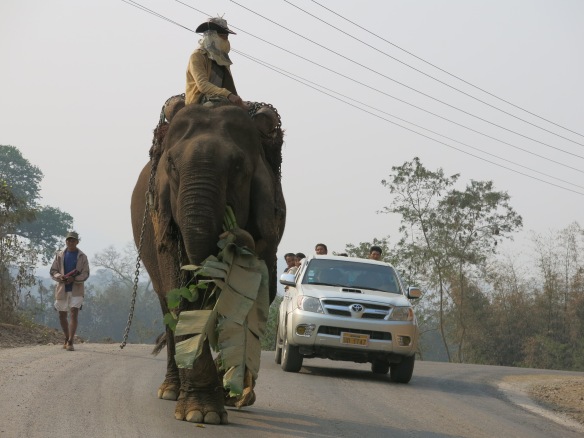 At one fuel stop, I noticed they had a promotion for selling oil…each quart came with a free lighter…?

Had a standoff with a few water buffalo

Beer advertisements in Laos are similar to what you find back home, but with more clothes 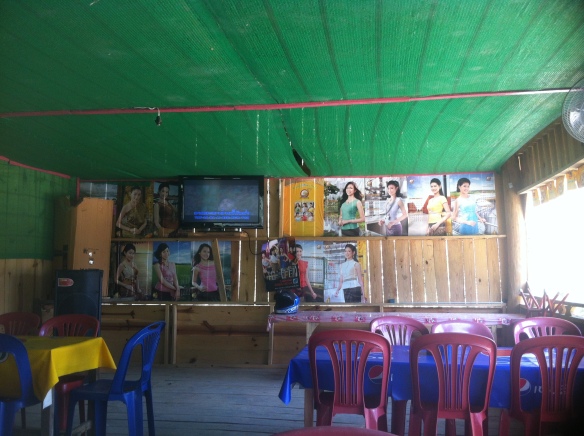 The main attraction in Phonsavan is the Plain of Jars

Not much is known about the limestone jars, but after finding bones in some, it was determined that they were large urns. One theory is that the dead would be put into the urns, and once their body decomposed, they’d remove the bones and bury them. 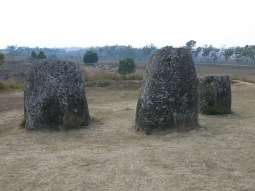 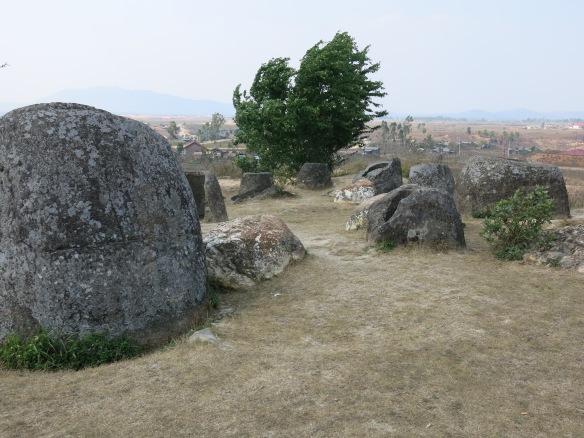 This area was also very heavily bombed from 1964-1973 (more on that later), and there were plenty of craters in the area. 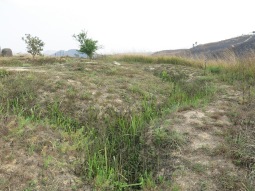 Throughout the sites, you can find these MAG (Mine Advisory Group) signs, which I’m assuming (and hoping) means that the area has been gone over with a fine tooth comb to clear out any old explosives. 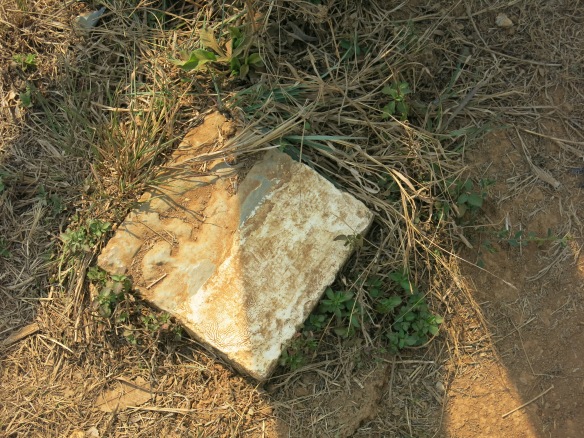 Not sure what this sign says, but the little skull and crossbones on the bottom is enough to keep me from passing it. 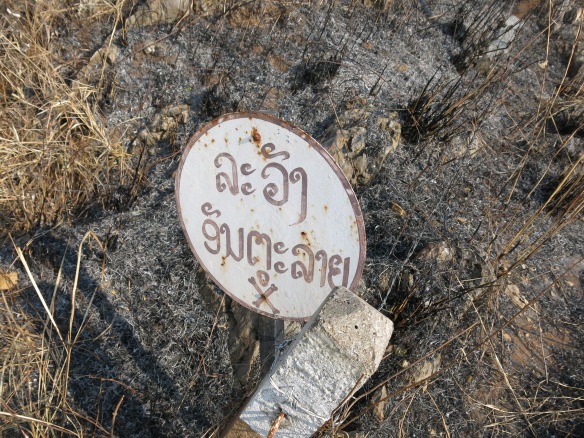 Another stop worth making (though not exactly uplifting) while in Phonsavan is to the MAG (Mine Advisory Group). MAG is a UK based organization that is working to remove UXO (unexploded ordinance) from former war zones, and they’re very active around Laos. Typically, this type of work would involve removal or destruction of old land mines, but in Laos, the majority of UXO is bombs and mortar shells that didn’t detonate when dropped or fired.
So…where did all these bombs come from? It’s been called the Secret War, when the US bombarded Laos from 1964-1973. These actions were kept completely secret from the US public and the rest of the world, as they went completely against the Geneva Accords, which declared Laos as a neutral country, and which the US agreed to.
Basically, the North Vietnamese established the Ho Chi Minh Trail, through SE Laos, in order to funnel troops and supplies into South Vietnam. This was the primary target for bombing runs in Laos.
I’m too lazy and stupid to bring up any more details behind the war, and there’s plenty of other places online with TONS of info… (look into it though…it’s terrifying, and also a shame that this piece of history is never really talked about).

These are a few facts that really struck me…especially considering that this whole atrocity was being hidden the entire time.
-The US dropped more explosives on Laos that they did on both Germany and Japan in WWII.
-A bombing mission was conducted every 8 minutes, 24hrs a day, over 9 years.
-Based on incomplete (read: underestimated) data, 0.8 metric tons of explosives were dropped for every person in the country.
-Bomblets, or bombies (the individual, grenade sized explosives that are combined to form a cluster bomb) make up the majority of UXO. Up to 30% of bombies did not detonate on deployment, which left up to 80 million of them undetonated across Laos.
-If a bombing mission over Vietnam had to be aborted once the planes were off the ground, there were 3 areas in Laos where pilots were ordered to drop their payload, as it wasn’t safe to land with it still in the plane.

Without getting involved in arguing about why the Secret War happened, whether or not it should have happened, etc etc etc, there are two things that really upset me about it…
First…why, to this day, is it never really talked about? Based on the sheer scale of what was done here, you’d think it’d come up in history lessons from time to time.
Second…why isn’t the US government doing more to remedy the situation? They made the decision to drop a fuckton of bombs, and they know that a huge number of bombs remain, undetonated, throughout Laos. To this day, these bombs are ruining lives and families, and keeping an extremely poor country in poverty. Maybe we could take a tiny fraction of our obscene military budget and direct it towards cleaning up a decades old problem rather than just forgetting about it and picking a new part of the planet to drop another fuckton of bombs on. Yes, the US government has helped fund MAG, but the fact that there is still so much UXO in Laos almost 50 years later tells me that they haven’t done enough.

One story of a MAG cleanup that struck me the most took place at a school. Everyone in the town new that the forest behind the school had UXO in it, so they would never let the kids play back there. When MAG came in to clear the forest, they found over 1100 bombies, and also found 5 of them underneath the playground at the school.

Half of a cluster bomb, filled with bombies 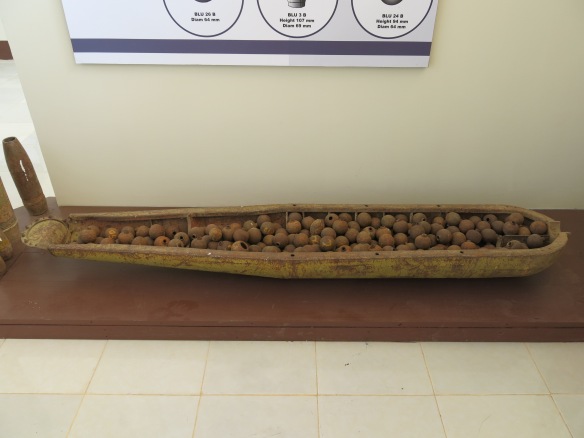 Strangely enough…there are many old bombs (defused, of course) that are on display throughout the town

OK, and to end on a happy note…this makes me smile whenever I’m riding around…
The kids throughout Laos seem to be far more independent than what I’m used to seeing back home. In the US, people always talk about how once you get your driver’s license, you gain so much independence. I’m pretty sure this same level of independence come in Laos once you learn to walk. Everywhere I ride, I see tons of little kids walking around…not just around their village, but often time in between villages. Sometimes they’re alone, sometimes they’re with a couple friends of the same age. If they’re very young, they’re typically accompanied by their much older and wiser brother or sister (who is still probably only 5) 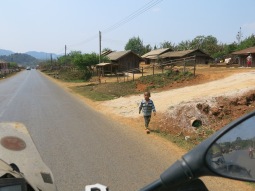 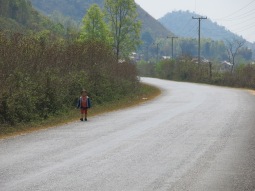