Once the bike was loaded on the boat in Penang, I had a few days to kill before picking it up in Belawan, so I decide to head to Singapore, rather than just flying directly to Indonesia.

When the plane was about to land in Singapore, they made an announcement that if you have any knives, swords, guns, gun shaped lighters, knuckle dusters, or nun chucks, that you need to check in with customs. They also mentioned that drugs are completely illegal and can result in the death sentence, so I guess it’s a good thing that I didn’t bring my nun chucks and cocaine!

Based on what I’ve heard about Singapore, I was expecting it to be immaculately clean and very futuristic. I’d say both of these descriptions are a bit blown out of proportion.

When I first started to walk around the city, the clean part was noticeable, but it wasn’t that much different than some other big cities. I’d say the primary difference was that you rarely saw cigarette butts on the ground…people seem to be really good about putting them out in an ashtray. So although it was definitely clean, it wasn’t that unbelievable.

As far as the futuristic type of place I’d heard it to be, I definitely didn’t get that feeling walking around the city. There’s lots of skyscrapers, and it seems modern, that’s for sure. There isn’t really much old architecture from the distant past. So although it was very modern looking, I wouldn’t say futuristic. Maybe the fact that it’s so uniformly modern is what makes people consider it to be more futuristic…it’s definitely fairly unique in that sense. 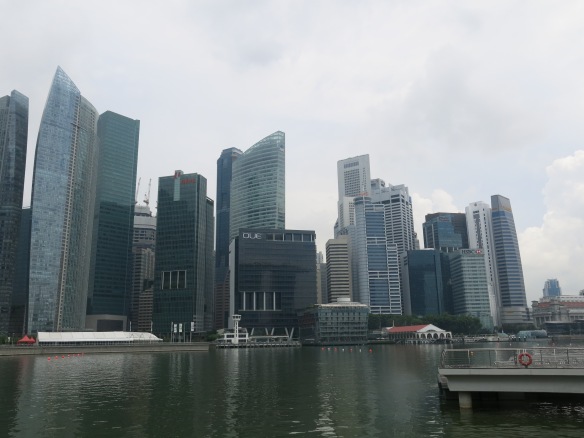 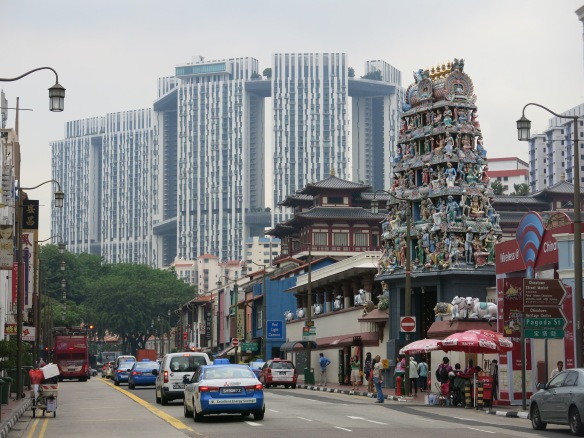 Once I left the towering skyscrapers and headed towards the Garden by the Bay, that was where the more futuristic feeling set in. The huge Marina Bay Sands building definitely has a unique look, like it or not. Looking at it for the first time, I felt it looked a bit out of place.

Behind the Marina Bay Sands is the Garden by the Bay. This place looked pretty wild from afar. 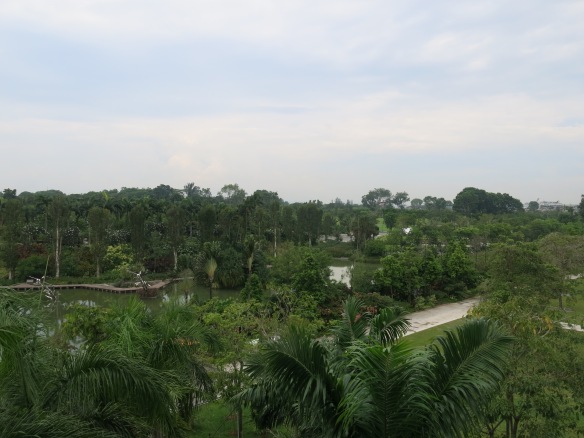 It looked a bit like a normal park (a very nice normal park, that is) except for the fact it was filled with Supertrees. 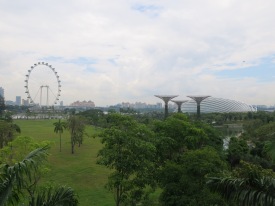 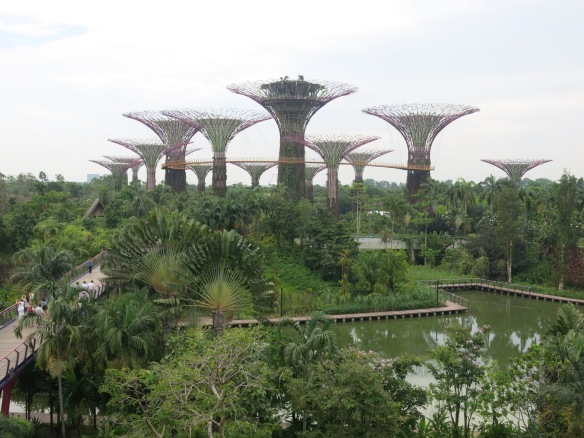 These things look like something from an architectural rendering, which you seem to see often enough on paper, but which never seem to actually be built.

Walking through the garden was a really strange feeling. I’ve never been so close to trees and felt so far from nature.
The only way I can describe it was that it felt like I was walking through an artificial park that’s on a space station from a SciFi movie (any nerds out there, think of the scenes shot in the garden on the Cloud 9 ship from Battlestar Galactica). The place was immaculate, the only sound I heard was an occasional bird chirp that could’ve been a recording, and these Supertrees were rising up like some strange combination of nature and technology. Add to this the glass domes and a huge spacey-looking ferris wheel and the Marina Bay Sands in the distance, and it really felt like I was on a different planet. 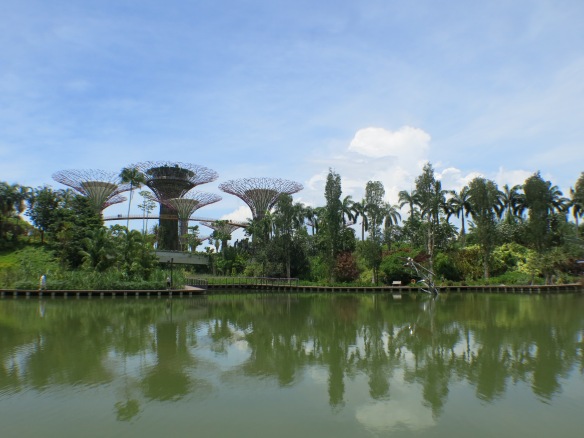 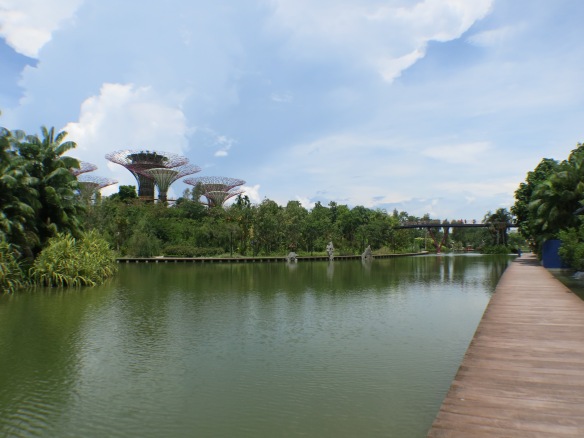 From this point of view, I kind of liked the look of the Marina Bay Sands…as I was in this weird SciFi mindset, it seemed to fit in fairly well. 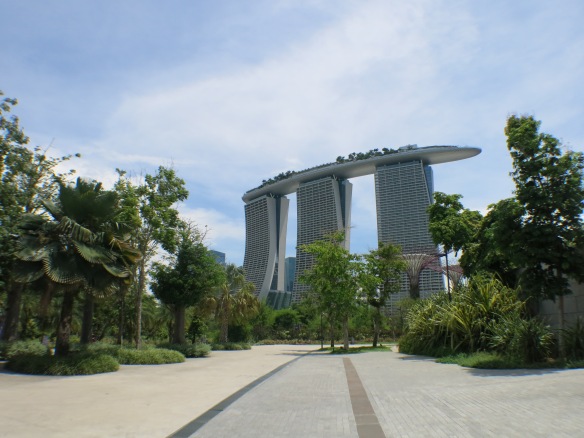 It was interesting to see how close different areas of the city were, which is necessary based on the limited availability of land. The Garden by the Bay was immediately next to the downtown area, and the massive port was visible from both places. They definitely did a good job of making them feel farther apart than they actually were. 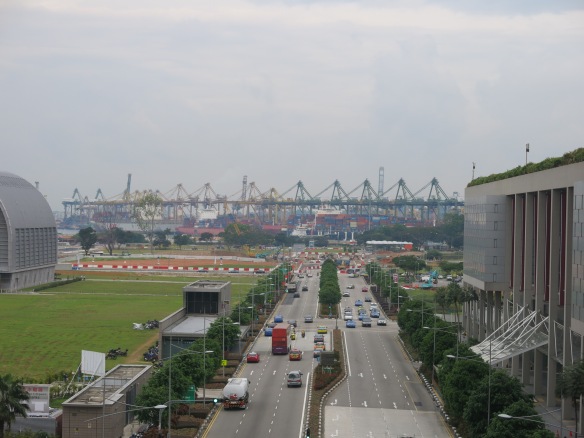 Some more pictures from the city…

Inside the sterile feeling subway system. It was here that I realized that a city that is so planned out and so well kept seems to be lacking something. The other cities I’ve been to in SE Asia seem to have a bit more character and soul, which I don’t think can be planned.

Some interesting green space integrated into these buildings 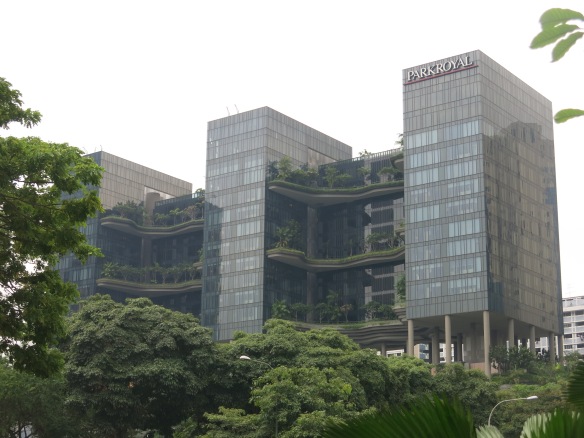 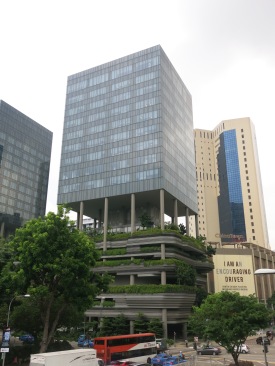 In the Marina Bay Sands shopping center…surely the first step to “going green” is not doing something as ridiculous as putting a river in a shopping mall.

And yes, you can take a boat on it…
If there are three ways that I never want to spend 4 minutes of my life, they’re A)burning alive B)drowning C)riding in one of these boats

There were a fair amount of these food courts throughout the city…this is definitely something that should be adopted by other parts of the world. And no, the food court in the Mall of America or some other shopping mall doesn’t come close to replicating these. 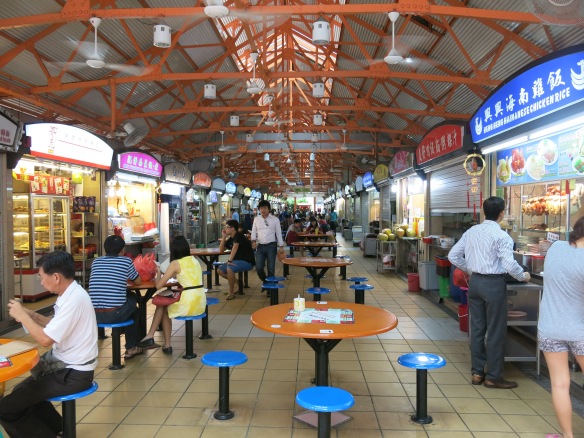 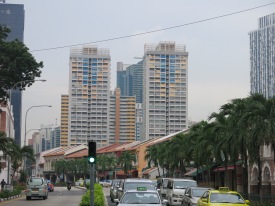 Tomorrow I fly to Medan, Indonesia, on the island of Sumatra, and the next day, I should be picking up my bike from the dock. It’s been a while since I’ve been this excited to get to a new country.