By the time I reached the end of the Gibb River Road, I’d arrived in Derby…and lucky for me, the annual Derby Rodeo was going on over the weekend that I arrived! 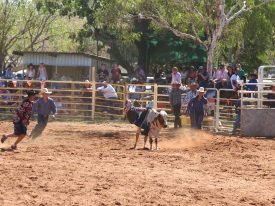 I had a free day in Derby that I spent changing out my from tire and my chain and sprockets.
My Rotopax fuel can worked pretty well as a brace for holding my front end up 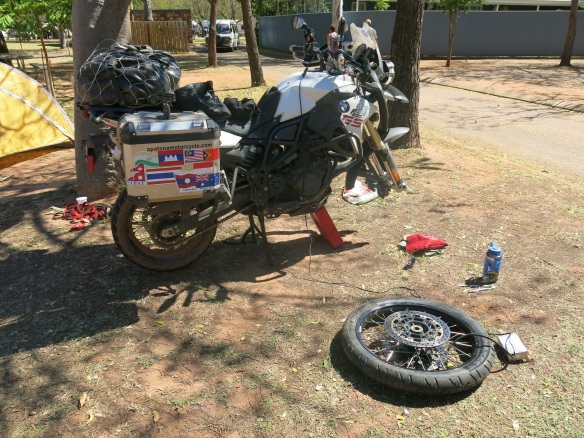 I changed out my front tire for a Michelin Anakee 3. The Anakee 2 is one of the better tires I’ve run, so I’m excited to try out the new one and see how it compares. My rear tire should also be shot by the time I get to Perth, so once I’m there, I plan to get the Anakee 3 on the back as well.

Changing out the chain and sprockets wasn’t quiet as easy as it should’ve been…as I was trying to remove the old chain, my chain tool broke, so to remove the master link, I used a small flathead screwdriver, a needle nose pliers, and quite a bit of elbow grease.
With the old chain taken care of, I got to work on replacing the rear sprocket. When I took the sprocket off the wheel, I noticed that one of the 4 cush drive pieces (there’s probably a much better name for them than that…) in the hub was in pretty rough shape

Nothing too serious, I guess, but I’ll look into a new one at my next major stop.
When I unbolted the old sprocket and tried to make up the new (aftermarket) one that I got in Darwin, I found that the bolt holes on the sprocket were too small…looks like the issues that I thought I was finished with in Darwin have come back to bite me in the ass! Oh well…the rear sprocket didn’t desperately need to be changed, so I put the old one back on and will plan to get a new one whenever I get my new rear tire.
So, with my new front tire, front sprocket, and chain, I’m ready to leave Derby…but first, a couple of the sights around town. 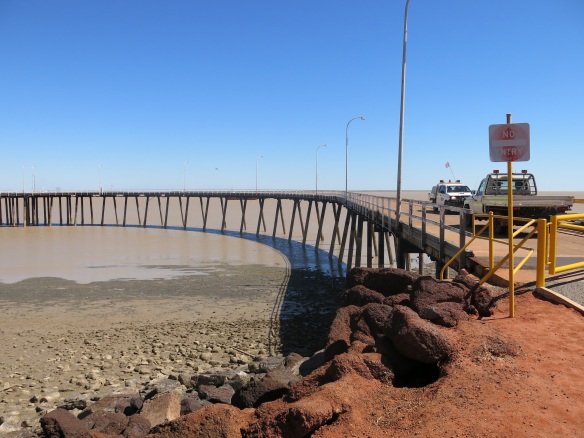 Looks a bit tall, and it is. The tide fluctuates more in Derby than anywhere else in Australia…11.8m, or 39ft!
And the water looks incredibly dirty, due to the fact that the tides were constantly rushing in and out…when you looked down at the water from the pier, it felt a bit like you were standing on a bridge over a river because of how fast it was rushing by.

And my last stop in town was the Prison Boab Tree. This massive, hollow tree was used to house aboriginal slaves as they were being transported from the Kimberleys (east of Derby) to Broome to work in the pearl industry, during the 1890s. Not exactly a fun stop, but interesting nonetheless.

From Derby, I headed to Broome to pick up my friend Leonie, and she’ll ride with me for the next week and a half or so down to Perth.
Broome seems alright…though a bit too touristy and kind of overrun with European people that want to party.
A day in Broome was enough…Leonie and I got all our stuff packed up and somehow figured out all to fit it all on my bike while still having room for the two of us, then we went down to Cable Beach for yet another fantastic Australian sunset. 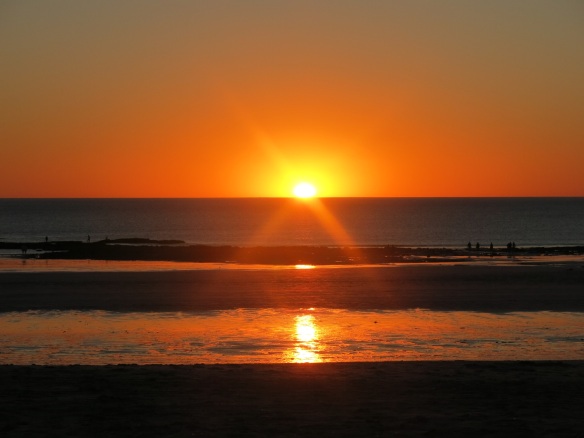