Skip to primary content
From Zakopane, I continued north to Gdynia to stay with a friend of a friend.
While there, my friends/hosts/tourguides Krzyzstof and Bart showed me around Gdynia, Sopot, and Gdańsk…tricities on the sea.  I had a couple days there to get shown around the area with good food, good beer, and great riding through the city, which makes riding around a city in the US feel like kindergarden.

Strangely, however, the faster paced traffic and closer quarters that I’ve experience so far riding throughout Europe still feels much safer than riding in the US and Canada.  In the US, I feel like people are paying so little attention that it negates (and then some) all of the extra space that is available.  Close calls are a regular occurrence at home, and after thousands of miles in Europe, I’ve only had one (and it might even be a stretch to call it that).
Gdańsk has a very long history…Its over 1000 years old, and for most of it’s life has been a free city.  It didn’t actually become a part of Poland until 1945.  Being the largest seaport in the area, and not being a part of Poland is what brought about the development of Gdynia. In 1920, Poland no longer wanted to face the expense of having all the imports and exports going through a free city, so they built up Gdynia as a large seaport. 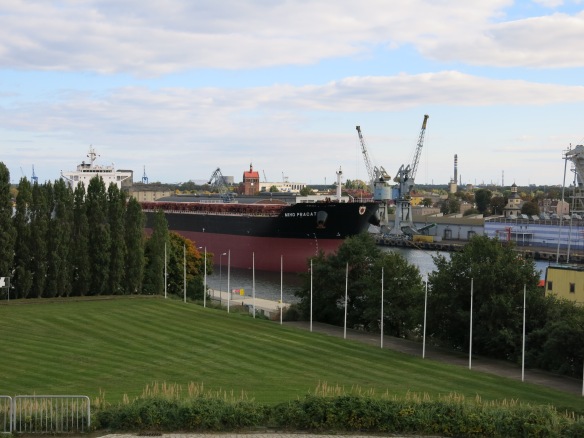 We also went to the the site of the start of WWII.  On September 1st, 1939, Gdańsk was attacked from the sea.  This monument is to memorialize the battle that took place there.

From Gdynia, Bart, Krzyzstof, and I rode down to Poznań and met up with their friend Marcin.  On the way, we took a short detour to see this massive castle in Malbork

And finally, we rode down to Wrocław to meet up with a couple more friends, Piotr and Pawel, and drank more vodka than necessary.  Here’s the four of us, all on F800Gs’s

Oh, and I saw this tree