I only paid a one day visit to the capital city of Delhi. I’m not really sure why, and maybe it was a mistake, but I didn’t really have any desire to spend any time there. The only reason I even stopped was because I need to get to the Fedex office to pick up a new ATM card that was sent from home. Within a couple hours of being there, I started to feel congested, much like in Mumbai…I guess I’m not good with pollution.
Once the sun went down, I felt a little bit like I was in Blade Runner. 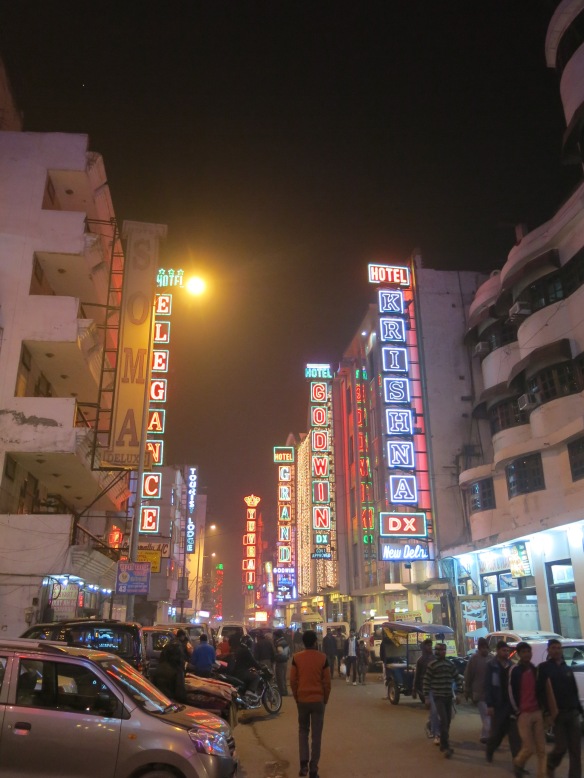 Two frustrating incidents on my way up to Delhi…
First, an attempted scam while fueling up. Now, before anyone brings up anything about how this type of thing always happens to travelers…I’ve probably stopped for gas about 100 times since leaving home, and this is the first time I’ve had any issue. On top of that, I’ve not had anyone in any other situation try to scam/swindle/pickpocket/etc. Maybe I’m just lucky (or maybe they’re incredibly good and I don’t realize that it’s happening all the time), but I think it’s far more likely that people exaggerate when talking about these situations.
OK…on to the poor attempt at working me over for 100 rupees…
When I pulled into the station, I told the attendant I wanted 500 rupees worth of petrol. He looked a little confused, so I said 500 again, made a “5” with my hand, and handed him a 500 rupee note. I don’t think I could’ve made it any more clear. So, he fills my tank with 100 rupees worth. I say again that I want all 500…I don’t want any change.
“OK, so 400 more?”
“Yep”
Without resetting the pump to zero, he continues pumping until the meter reads 400, which means he still owes me 100. He keeps insisting that 400 + 100 gives me the 500 I paid for. But I refuse to back down, and before long he gives me the last 100, scowls, and calls me (I’m guessing) an asshole in Hindi.

Next incident…a bit of a hangup (groan…) at a toll booth.
Until now, all of the toll stations I’ve encountered are only meant for cars and bigger vehicles, so motorcycles are free to just bypass the whole ordeal via a narrow lane with no gates. This particular station charged motorcycles 12 rupees, and they had a special lane just for bikes. So I make my payment, pass the gate, and just before I get back on the highway, the lane I’m in goes between two narrow concrete posts. Before I even reach them, I notice that at best, it’ll be a very close call, so I slow down. As I get closer, I realize that there’s a good chance my fatass bike might not even fit, so I slow down to a walking pace. And sure enough, I’m about an inch too wide.
Within a few seconds there’s about 10 bikes behind me, waiting…and honking. Had I been able to work in silence, I would’ve been out of there in no time, but the ridiculousness of the honking just encouraged me to take my sweet time. Luckily the panniers I have remove and remount really easily, so it only took a few seconds to be on my way.

And while I’m thinking of honking, I saw signs in Delhi for a non-profit organization that is working to stop unnecessary honking across India…best of luck to them, but I think they’re fighting a very steep uphill battle.

My next stop, on the way north, was Chandigarh. I wouldn’t have visited this particular city over any others if it weren’t for the fact it is a planned city, the work of the famous architect Le Corbusier. It had a very different layout that any other city I’ve been to in India (or any city I’ve been to outside of the US or Canada, for that matter). What stands out the most is that the streets follow a very repetitive grid pattern. Although its easy to find your way around, and I’m sure is much more efficient and economical to build a city from the ground up in this manner, I feel like it was lacking character…There didn’t seem to be much that was unique about the different areas. It probably also didn’t help that the 47 different rectangular sections of the city are each named “Sector” followed by the specific number. I would’ve thought I’d be the last person to be bothered by it, but I guess I like the idea of neighborhoods having actual names. In Denver, you can live in Park Hill, the Highlands, Uptown, Platte Park, etc…in Chandigarh, you have sector 17, sector 24, sector 36…I guess it just made the place feel a little bit sterile. With that being said, I stayed there for one day, so what do I know…

I didn’t have to ride around the city for long to see one thing that was really great about it…the parks. Often, I think cities lack enough green space, and for me, it’s one of the main things that differentiates the good cities from the bad. The main attraction of this type in Chandigarh is the Rose Garden, which is the largest one in Asia. A short stroll through it provided some much needed relief from the busy-ness and constant honking that seems to be unavoidable in the city. And on top of that, it was great to see how utilized this park was…lots of people were out enjoying the nice weather.

Another great little part of Chandigarh was the Rock Garden. It was secretly started in 1957 by a guy named Nek Chand, and was built only from industrial waste and rocks from the site. It was originally a land conservation area that nothing could be built on, so all his work was being done illegally. He managed to keep it all a secret for 18 years, and once it was discovered, the people and city of Chandigarh backed the idea, and worked continued on it until 1996. 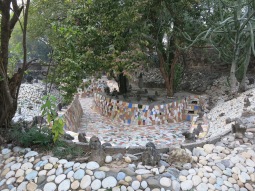 This place was much bigger than I expected, and I was continuously surprised when I’d round a corner or pass through a doorway, only to see yet another place that I only thought could exist in fantasy stories. 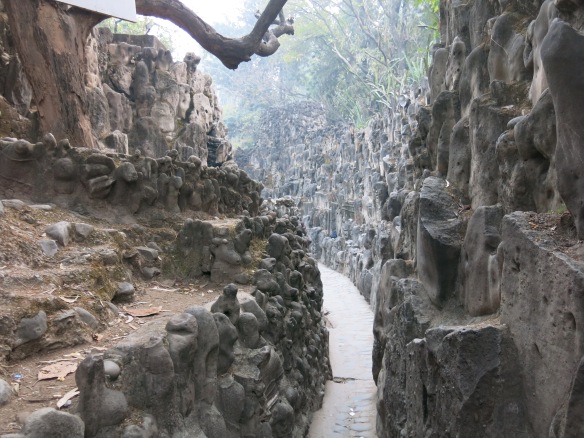 Although I didn’t see any, I’m pretty sure there are some elves or gnomes living in this place.

The only thing I wish was different is that I was seeing this place as my nine year old self.

Towards the end of the garden, there were these huge collections of statues of people and animals…I’m not sure if Nek Chand’s goal was to creep people out, but I was just a little bit.