Another stop I made in Siem Reap was at the Cambodia Landmine Museum.

The museum was founded by Aki Ra, a Cambodian with a pretty fascinating life…He was born in 1970 (he was only able to confirm his year of birth recently), and at age 5, his parents were killed by the Khmer Rouge. He was placed in a Khmer Rouge orphanage, and shortly after was taken (with a number of other kids) and raised by a woman in the camp. At age 10, he was given an AK-47 and conscripted in the army, where he learned how to fight and plant land mines. At 18, he escaped from the Khmer Rouge and joined the Vietnamese, who were fighting the Khmer Rouge at that time.
After his time as a soldier, he began to see the amount of damage that landmines were still doing through Cambodia, so he started using his knowledge to both find and defuse them.

All of the items on display at the museum have been found and defused by Aki Ra himself. He estimates that he’s cleared over 50,000 land mines and pieces of unexploded ordinance over the years. 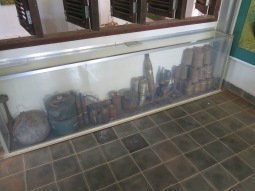 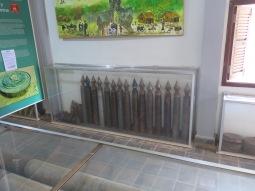 After getting more and more involved in the clearing process, Aki Ra also started taking orphaned landmine victims into his family’s home to provide them with a safe environment and education. Today, the museum complex is also home for over 3 dozen disabled children from poverty stricken areas of Cambodia where they weren’t otherwise able to be properly cared for.

One particular disturbing statistic…1 in 250 people in Cambodia have sustained a landmine injury.

I think this place is sometimes a little overlooked in Siem Reap, but if you’re there, it’s worth making a quick trip there.
http://www.cambodialandminemuseum.org