With 25125 miles on the clock since leaving Denver, I’ve gone further than the 24860 mile circumference of the earth. I thought that was kinda cool…

I’ve left Thailand and entered Malaysia.  I’m already missing eating pad thai on a regular basis, but at least the wonderful roads make up for that loss.  So far, I’d say the roads here are just about on par with what I found in Northern Thailand.  The only difference I see so far is that the quality of the road surface in Thailand seemed a little bit better, but with that being said, it’s still been really good so far in Malaysia.

My last few days in Thailand were spent in Phuket. I spent all my time there doing research on the next couple months of my trip, so I don’t really have anything to say about the place. I didn’t even take a single picture while there.

As I headed south, I started to notice a flood of big bikes riding north, I’m assuming from Malaysia. Harleys, choppers, BMWs, Japanese bikes of all kinds, and Ducatis…for some reason there seemed to be an abnormally large number of Ducatis. It was a weird site after such a long time of rarely seeing a bike over 200cc.

On my second day in Malaysia, I arrived in Gerik, which is near the Belum Rainforest

I spent a day just riding around the area, enjoying the racetrack-like roads, getting a little off the beaten path, and staring at the unbelievably dense rainforest.

At one point I pulled over at a rest stop, where I was immediately approached by a few guys that were crowded around a bunch of scooters. They were looking for someone with an air pump…and who better to ask than a guy with huge panniers on his bike. First they were happy to hear that I had one, and when I took it out of my pannier, they were even happier to see that it wasn’t a hand pump.
So, they took the rear tire off the unlucky scooter, and proceeded to pull a tshirt and jeans out of the tire, which they had used to keep the bike on the road until they could find a pump.

Everyone there was wearing a shirt and pants, so I’m not sure where they came from…seems like it would be better to just bring along a pump rather than spare clothes to jam into the tire.
Once the new tube was in place, it was time to get the tire back on the rim.
Step 1 – put away your tire irons
Step 2 – take off your shoes
Step 3 – dance on top of the tire

Once it was inflated and put back on the bike, we had to have a mini photoshoot, then they gave me a couple mangos in exchange for the use of the pump, and we went our separate ways. 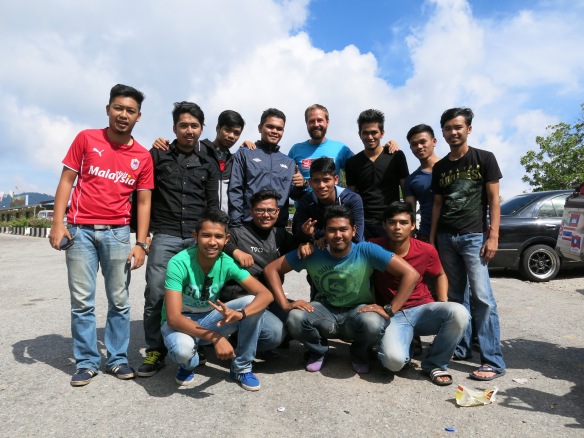 While riding around one of the days, I thought I was hallucinating when I saw a huge (maybe 3ft long) monitor lizard just trucking along down the side of the road. I quickly stopped to get a photo, but it ran off into the weeds, out of site. After giving up on getting a photo and continuing on, all that was on my mind was hoping that I would see another one and could get a picture. In the middle of thinking this, one came hauling ass out of the ditch and I almost ran him over. After another emergency stop and scramble for my camera, I managed to get a picture as he ran through the ditch on the opposite side of the road.