From the Ijen Plateau, it was a short ride to the port where we left Java for Bali.
We stopped for a couple days in Lovina, on the north coast of Bali. 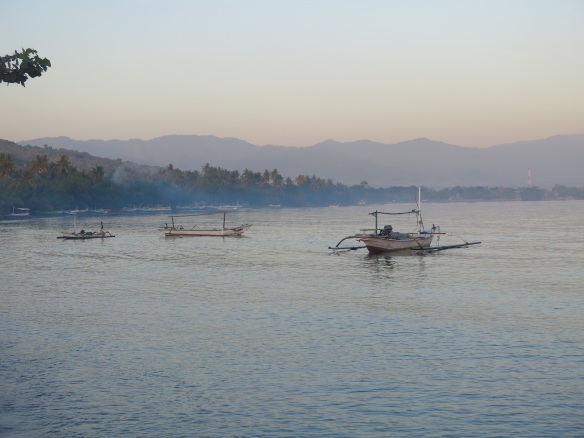 If I had one goal for Bali, it was to eat cheeseburgers. The last proper burger I had was in January in Bangkok, and I felt like I was well overdue for one. I’ve been missing food from home quite bit lately, and the cheeseburger is definitely on the top of my long list of what I want to eat.
For my first meal, I ordered what I was sure would be the remedy…a bacon cheeseburger and french fries! My mouth was watering with anticipation the whole time I was waiting for it, and when it came out, I found myself staring at a bun with a couple bits of vegetables, a few burnt and shriveled pieces of bacon inside, and a piece of cheese that would make Kraft Singles look like the all natural option…no beef…apparently their version of a bacon cheeseburger replaces the hamburger patty with bacon.
The next day, I had to make another attempt, as I was clearly not satisfied with what had happened the day before.
Step one: Go to a different restaurant. This one had burgers that were a bit more expensive, but I figured this was a worthwhile option, as surely their quality would be a bit better as well
Step two: Order a plain hamburger…no need to get fancy…I had to be sure this thing had beef on it and couldn’t be screwed up.
Step three: Stay away from cheese. I’ve had it a couple times in Indonesia, and it’s always been a disappointment. At best, it’ll add nothing to the burger, but it’s much more likely that it’ll contribute to the destruction of what could otherwise be a mediocre hamburger.
Step four: Wait…and hope.
Unfortunately, this was some 2008 presidential election type hope…despite the fact there was a shit ton of it, it didn’t do anything to help the situation.
My waiter delivered me a sorry looking burger that wouldn’t stand up to what you’d expect from a dorm’s cafeteria. This thing had a impossibly thin piece of whitish grey beef (I’ve never before seen this shade of beef). We’re talking thin like a piece of deli meat…like the kind you use 8 or so of to make one sandwich.
At this point I gave up. I couldn’t try to order another burger any time soon, as the risk of disappointment was far to high. I guess I just need to try and not think about the food I miss and continue eating rice, ignoring the fact I’ve had it for the last 37 meals.

One of the main things to do in Lovina is to see the dolphins, which are not far off the shore early each morning. We hired a boat to bring us out there at 6am, and I was expecting much more than what I got. I thought it’d be a peaceful situation where some boats sit out there and the dolphins swim by…instead, it was about a hundred boats swarming around, each piloted by a driver with a twitchy throttle hand. 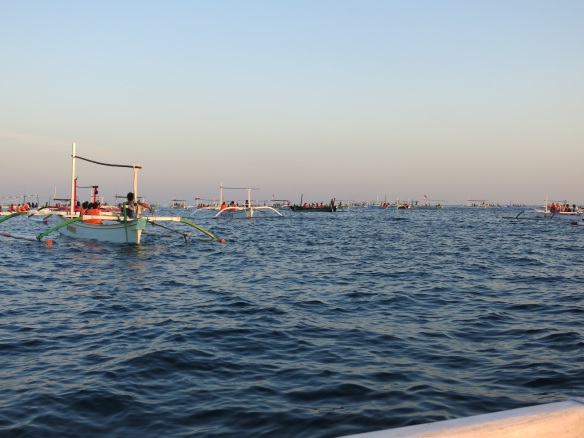 As soon as one person saw some dolphins surface, all you heard was about 20 boats at full throttle, hauling ass straight towards them, immediately startling them and scaring them off…DUMB!

This was about all you could see…an occasional dolphin coming up for air off in the distance, then escaping this massive crowd of boats 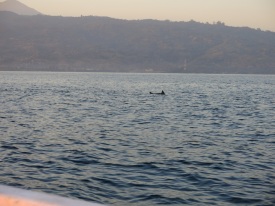 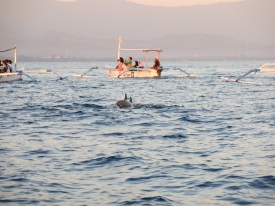 From Lovina, I headed south. I made a quick stop at the Bali BMW Dealership, as my combination switch on the left had been acting up lately. Unfortunately, I didn’t get as lucky as I did in Penang with the right switch, so I wasn’t able to leave with a new one. I did pick up some contact cleaner and sprayed a bunch in the switch assembly. It seems to have helped a bit…I guess I’ll just have to do that on occasion until I can figure out a more permanent fix.

I stayed for a few nights with a couple friends in Ubud, which is more in the center of Bali, away from the beaches, and pretty much surrounded by rice paddies.

The place they put me up in has to be the most luxurious spot I’ve stayed on this whole trip…light years beyond my typical dirty, sweaty, tiny guesthouse room with a bed in the corner and a shower head mounted to the bathroom wall if I’m lucky. 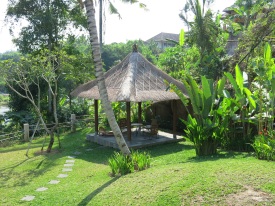 Occasionally in the mornings, I’d wake up to a blessing on my motorcycle…I’ll continue to take anything that the world throws at it to help keep me safe!

Ubud is a great spot for a bit of a break. It’s not as cheap as what I’ve gotten accustomed to in Indonesia, but it’s very worth the extra expense for a little bit of comfort. And the most comfortable thing about the place was the food. I’ve gotten a bit tired of having such similar meals 3 times a day in Indonesia, so I went a bit overboard here…Bacon, fried eggs, and toast (with jam and real butter!) for breakfast. Pizza, enchiladas, nachos, beers, and margaritas for lunches and dinners. Pastries, chocolate, and cheesecake for desserts. If it isn’t obvious, I’ve really been missing the food from home lately.

Four of us hiked up Mount Batur one morning, early enough to get to the top to see the sunrise. 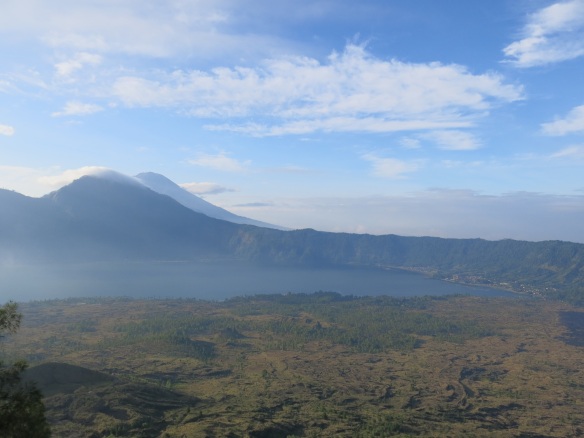 Eruptions have happened from three spots on Mount Batur, one in 1968 left this massive lava field.

Around Ubud, I saw plenty of penjor, which are these large poles put up along the roads in front of all the houses. They are put up (along with various offerings) around the Galungan holiday, which is when spirits of the deceased come back to visit.

While in Ubud, I happened to meet Aileen, who is just getting ready to embark on a motorcycle journey of her own. She’s working out the final details and will be leaving Bali on her Honda Tiger any day now.
You can follow along on her travels at www.themotoquest.com

Aileen has been in Ubud for quite some time now, so she showed me around a bit. Once nice stop we made was at the water temple, Tampak Siring. The Hindu temples in Bali are much different than what I saw in India, and this one was especially nice.