Getting to Darwin was completely comfortable in some ways, but a bit shocking at the same time. Although it looked so similar to a city in the US (which I should be totally used to after 30 years of living there), it still felt weird to not see any buildings with three walls and corrugated tin roofs.
Sure it might be “nicer” here, but I can’t decide if that’s necessarily better…yeah, it’s easier to get a good cup of coffee in an air conditioned restaurant here, but there’s no way you’re going to get a huge meal of fried chicken, rice, and vegetables for $1.50, and it’s a lot less likely that that cup of coffee is going to be served to you by someone who actually gives a shit about their job.
There’s plenty of other things and situations that could be compared, but I don’t have all day. Ask me about the subject over a couple beers sometime, and I’ll talk your ear off.
Although I gladly could’ve spent a lot more time in SE Asia, I couldn’t be more excited to be in Australia…I’m really looking forward to the long riding days ahead (though I may regret saying that when I’m in the middle of the long, straight, flat, treeless Nullarbor).

Ok…so I’m in Darwin, in the Northern Territory. Here’s what I know about it…
-In 1839, John Clements Wickham founded the city named it after his homeboy, Charles Darwin.
-During WWII, on February 19, 1942, it was bombed by the Japanese (the same fleet that attacked Pearl Harbor). 243 people died and there was severe damage throughout the town.
-In 1974, a massive cyclone swept through on Christmas morning. They estimated that wind speeds reached up to 260kph, but don’t have an official reading as the anemometer at the airport broke at 217kph. 90% of the buildings were destroyed, and 71 people were killed in the storm.
-Everything here looks fairly new, which makes perfect sense after all the damage from the cyclone.

I have to do three things while I’m here…
-clear my bike through quarantine and customs
-pick up a new chain and sprockets
-try to adjust to the insanely high prices.

The boat with my bike was meant to show up in Darwin on Thursday, the 24th. But on Tuesday, they pushed the arrival day to Friday, which happened to be a public holiday, so nothing could get done until Monday. By Monday, they hadn’t finished unloading the boat, as they were understaffed over the holiday weekend. By Tuesday, they finally had the bikes (Ben had his Africa Twin in the same container) unloaded, so we scheduled for a quarantine officer to come inspect them. This was the part that worried us a bit, as there are plenty of horror stories online about how strict these guys can be. It would be bad enough to have a delay in getting the bikes, but recleaning them, and then repaying the $147 quarantine inspection fee would be even worse!
Luckily the officer we had was pretty laid back. He talked to us about our travels, browsed quickly through our bags and over the bikes, then let us go on our way.
Next, we needed to get a customs officer down to the shipping yard to clear the bikes through customs and stamp our carnets in. When we called them, they of course said that they couldn’t have anyone down there that day. Rather than wait, we decided to push the issue a bit, and walked over to the customs office with all of our paperwork, hoping to get there before they closed. Maybe since it was the end of the day, they just wanted to get us out of their hair so they could all go home…either way, they did just that and stamped in our carnets without even looking at the bikes.
So, back to the shipping yard we went. Both bikes turned over just fine when we tried to start them, but they wouldn’t fire up…the tiny bit of fuel left in them must’ve evaporated over the last month. The last guy working at the yard gave us a quick ride to a gas station to fill up a jerry can, and with a couple liters of fuel in the bikes, they fired up and we were off…Words can’t express how good it felt to finally be able to ride again!
The next day, we needed to get the mandatory insurance for the bikes, which required a brief roadworthy check of the bikes, which required sitting in line for three hours waiting for the roadworthy check.
With all that done, the bikes were now legal to be in Australia and legal to be ridden on Australian roads…now, if only I had a new chain and sprockets…

About a month before getting getting into Australia, I emailed a shop in Darwin, telling them I’d be there in a couple weeks and that I wanted to pick up a new chain and front and rear sprocket, and asked if they could either set them aside for me, or order them in. A few emails went back and forth just clarifying everything, and by the end, I figured the parts would be waiting for me whenever I arrived.
On day one in Darwin, I took a bus to the shop, only to find they’d never been ordered. I asked again for them to order them, and they said they’d be here in a few days…not really a problem, as I knew I’d be waiting at least that long on my bike.
After a few days, they had a chain and rear sprocket, but the front sprocket would be a few more days…again, not a huge problem, as I still didn’t have the bike through customs at this point.
As soon as I was through customs, I rode down there to have a chat, only to find out that the front sprocket (which of course was the one part I needed the most!) was on backorder this whole time…so, they ordered another one from a different supplier, which should be here in four days…unfortunately there isn’t much I can do, as I don’t want to get out into the middle of nowhere when my chain and sprockets in their current state, but I can at least check out some stuff nearby in the meantime.
So, instead of waiting around Darwin, I’m going to head into Kakadu National Park for a few days, then I’ll come back here next week when (hopefully!) my front sprocket shows up.

I felt a bit like I’d forgotten how to pack this thing after such a long time off it, but I finally managed to get everything loaded up 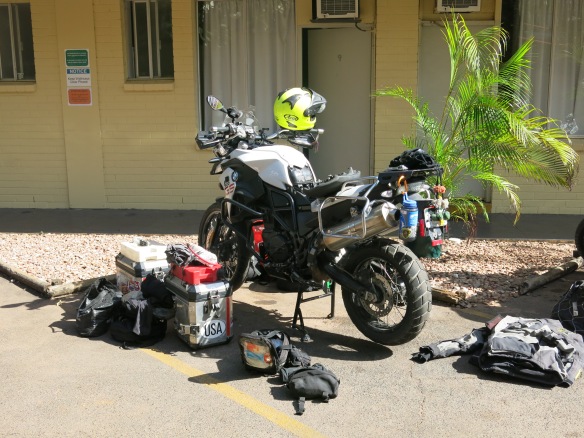 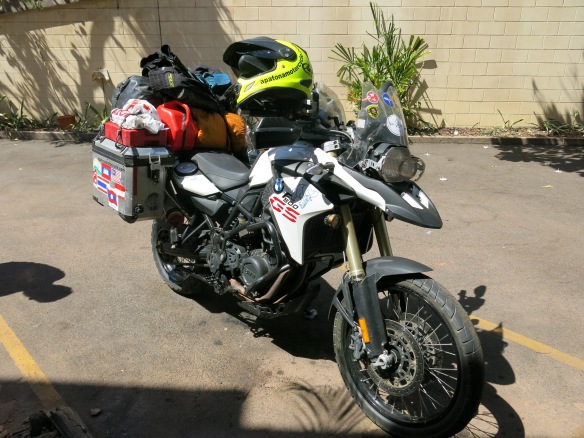 And here are a couple random pictures of Aboriginal art from the Darwin Museum, and one of Sweetheart, a 5.5 meter long saltwater crocodile. 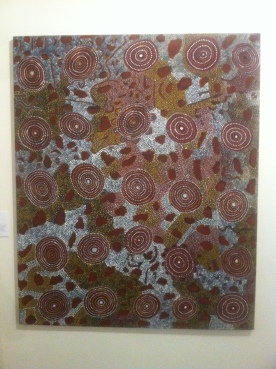 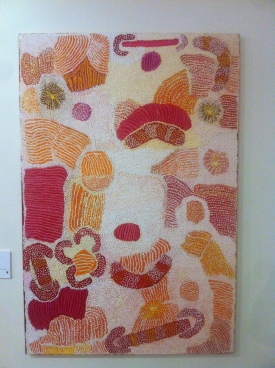 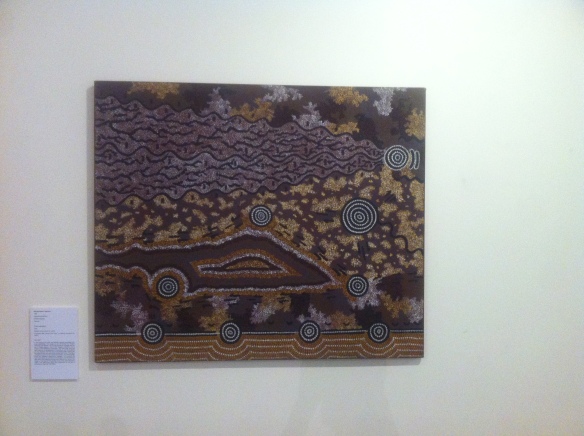 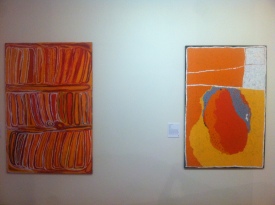 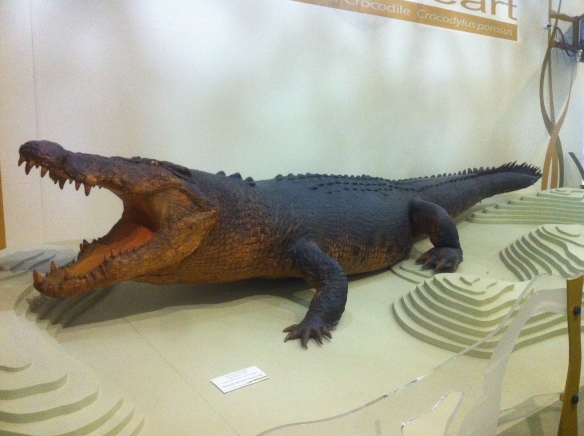 Alright, next post will be more photos and less words…