Skip to primary content
At a glance, an address from another country can sometimes be a little bit confusing, but it’s really been interesting to see how different the addresses in small villages can be.  For example, in Nemčičky, where I’m staying now, street names apparently are not necessary.  It’s a small enough place that everything just has a number.  And on top of that, the numbers don’t seem to line up in any way that would make it possible for an outsider to predict where a given house is.
An example of the order of house numbers I saw while walking down the main street…all these are from the same side of the road:
206, 92, 180, 159, 162, 179
All I can figure out is that whenever a new place is built, they give it the next number, regardless of the where it’s located.
Another interesting address I found was in the UK.  In the tiny village I stayed in, they apparently didn’t even need a number for their house…a name was enough.
This place was called Bodellan Farmhouse (Bodellan was the last name of the original owner of the farm from a few hundred years ago).
Thank god for Google Maps, because in both of these cases, all the logic in the world wouldn’t have done anything to get me to my destination.  At least in the UK I could’ve asked for directions…that probably wouldn’t have gotten me very far in Nemčičky, though.  Maybe I could’ve somehow expressed that I was looking for the home of a winemaker, which would’ve at least narrowed down my possible destinations from 250 to about 80.
Moving on to food…butter is dead to me.  I never thought it’d be possible to find such a wonderful topping for bread.  Is it lard?  Nope, I’ve had that, and while good, it’s not good enough.  This stuff is called škvarkové sádlo…ask for it next time you’re at Safeway.
This stuff takes lard to the next level.  It’s 1/2 lard, 1/2 cracklins fried in lard (I think?).  Mix it up, spread it on a good piece of bread, and prepare to have your mind blown.  At all the meals where I’ve had it, we had a huge spread of bread, meat, sausage, vegetables, and various cheeses, but I was never able to put any of that on my bread.  The idea of interfering with this glorious flavor felt like a crime.
I spent Sunday afternoon riding around for a bit.
We’d taken various dirt & mud roads in order to access the various areas we were working, so I figured I’d revisit some of these roads in the bike. For the most part, it was some really fun riding on rutted and potholed dirt roads…and then there was the mud. As the roads got deeper into the woods, the mud got muddier, and my rear tire got squirrelier…and the result was a couple falls.

Everything on the bike and body held up fine, and the Altrider crashbar/shovel worked as expected. 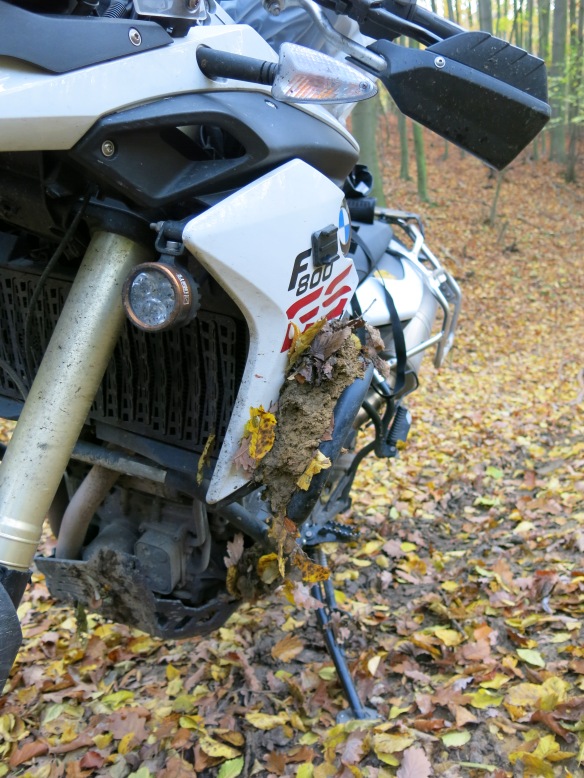 OK, I’ve bored you enough…here are a bunch of various pictures of the vineyards in the area.